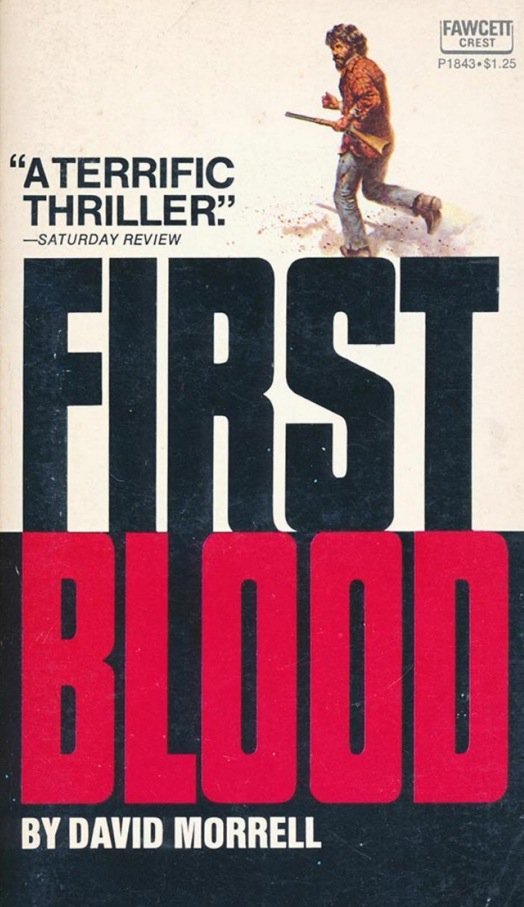 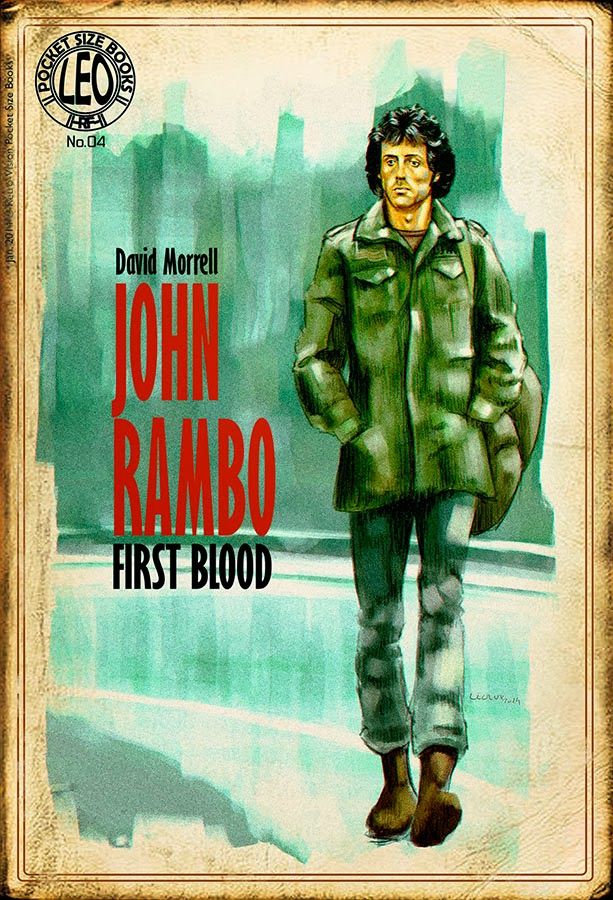 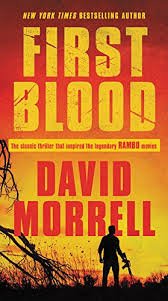 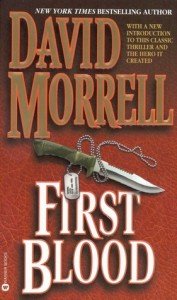 First Blood, a first read 40 years too late in reading for many. The author starts the story with introducing a name, Rambo and having the reader build an image of this character in mind, he successfully paints the portrait partly introducing Rambo, the long hair, the rough looking image, his sleeping carry sack on the road drifting wondering and then loads us with confrontation a police officer that seems to have issues with his hair, his wondering, his smarts and his look of a man that can take care of himself. Imagine you never saw Stallone and the movie and so far we are slowly introduced to Rambo and who he is.

We start to learn some more of Rambo when he reaches a situation involving water in an uncompromising situation and then the memories with water and a hole involving bamboo come flooding back and we now start to build a better understanding of the darkness, the shadows that haunt him. I love the way he slowly introduces us to a scene of confrontation and slowly reels us to learn the ways that John behaves. You feel for John he is being treated unfairly almost a victim of discrimination in the beginning as a kind racial issue in a way, as if he was someone from another country, a people that the officer hated, maybe a person he once fought against, the officer seems to not like his looks, but he will learn that deep down what he doesn’t like is maybe that could be another version of him walking around somebody he may have been or could have been and gone loose in the wilderness out killing and fighting a war in his own backyard. He could be scared of his own image in this man and wanted to rip and drive him to the ground and that was the biggest upset, Rambo was no vagrant to be meddled with. This was no enemy, a man like himself both fought in wars, he is all American Rambo, he should have been left alone to his own devices but alas our dear author David Morrell chooses to use this bullying officer to bring out his worst but most skilled ability to kill he shows us an unforgettable Rambo, a name, a character who would did take the world by storm and be engraved in every book reader and moviegoers mind across the world.

Rambo a veteran back from a brutal war that took probably the best of himself away in another hemisphere and now the person left behind having to assimilate back to society with vivid memories, terrible nightmares, for only a brief experience can bring back all the pain, all traumatic experiences, bring about fear, a rash behavior, unflinching and with no prisoners. Sheer Craftsmanship in telling this very human tale of the evil that men do and see and then returning home, told in a way that only David could have told it. Getting you off to a good start is the key of great storytelling, introducing parts and a name of the character stuff of great stories, you only have to read Lolita or Moby Dick or Metamorphosis to see great examples of first sentences, then after that first chapter or paragraph having you immersed and captivated to the very end.

“Sure you’ll fight. Sure. What a laugh. Take a look at yourself. Already you know what this place reminds you of. Two days in that cramped cell and you’ll be pissing down your pant-legs. ‘You’ve got to understand I can’t stay in there.’ He could not stop himself. ‘The wet. I can’t stand being closed in where it’s wet.’ The hole, he was thinking, his scalp alive. The bamboo grate over the top. Water seeping through the dirt, the walls crumbling, the inches of slimy muck he had to try sleeping on. Tell him, for God’s sake. Screw, you mean beg him.”

” ‘Green beret?’ Lester said. The voice was starting to repeat, broke up, never came back again. It started to rain, light drops speckling the dust and dirt, spotting Teasle’s pants and soaking in, pelting cool on his bare back. The black clouds shadowed over. Lighting crackled and lit up the cliff like a spotlight, and as fast as the spotlight came on, it went off and the shadows returned, bringing with them shock waves of exploding thunder. ‘Medal of Honor?’ Lester said to Teasle. ‘Is that what you brought us after? A war hero? A f*****g Green Beret?’ “

“His name was Rambo, and he was just some nothing kid for all anybody knew, standing by the pump of a gas station at the outskirts of Madison, Kentucky.”

Below is what i asked this author in an interview I hosted, I asked a few questions on this book and the movie adaptation, to read the rest of the interview on writing and his new Victorian London mystery,  Murder as a Fine Art visit it on my webpage> https://more2read.com/review/interview-with-david-morrell/ 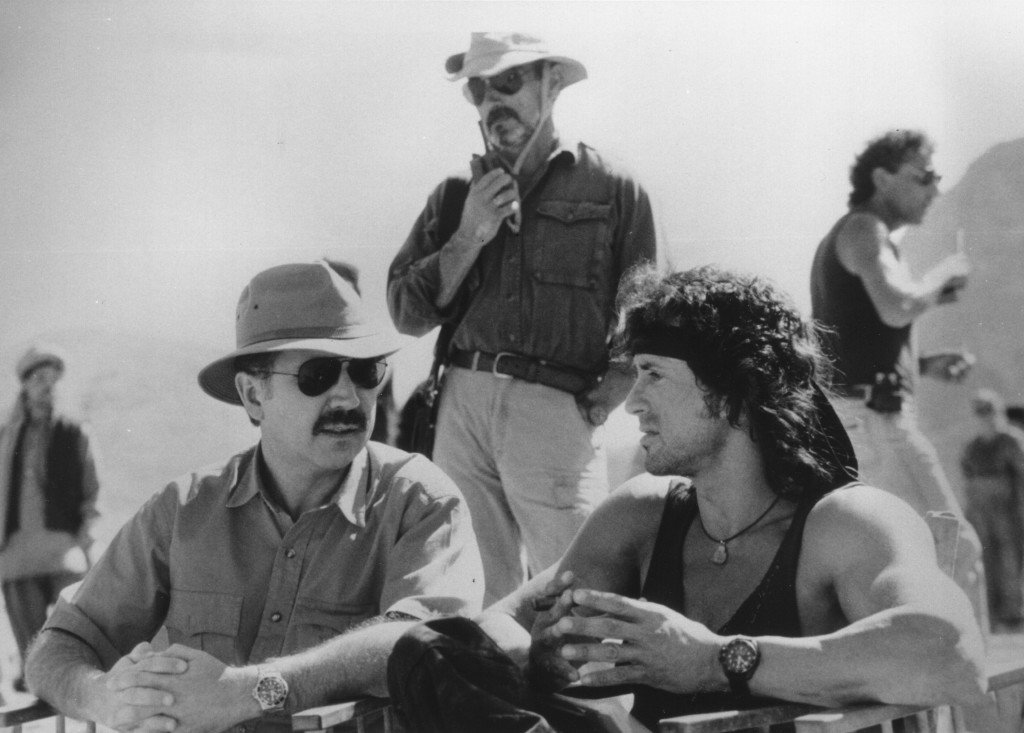 What inspired you to write First Blood?

I was a graduate student at Penn State in the late 1960s. I taught composition classes there, and many of my students were Vietnam veterans. They told me about their difficulty adjusting to peace time—sweats, nightmares, reaction to loud noises, difficulties relying to people. We now call this post-traumatic stress disorder. Back then it was called battle fatigue. I decided to write First Blood, about a returned veteran who was trying to adjust to the disturbing knowledge that he was skilled at killing. At the time, the United States was ravaged by hundreds of riots, many of which were against the Vietnam Wars. It was as if a different kind of war was happening at home. Basically, First Blood became an antiwar allegory about a version of the Vietnam war occurring in the U.S.

What did the movie adaptation of your novel First Blood do for you creation of Rambo?

The character in my novel is extremely angry and bitter. The character in the film adaptation is portrayed as a victim. The plot is mostly the same, but the interpretation is different. On some Blu-Ray DVDs of First Blood, I provided a full-length audio commentary about the differences between the novel and the film.

The novel was published 41 years ago, and it’s never been out of print. The Rambo films brought attention to the novel, of course, but even before the release of the first film in 1982, First Blood was taught in high schools and colleges across the United States.