Fire and Ice (The Dead Man #8) by Jude Hardin 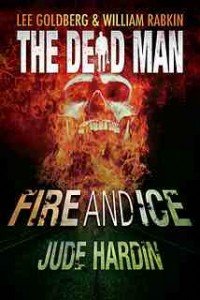 The saga of Matthew Cahill continues as the man who sees a nightmarish netherworld nobody else does fights to save us all—and his own soul—from the clutches of the purely evil Mr. Dark. On Matt’s third day of temping at a plant, disgruntled former worker Kevin Radowski (aka K-Rad) walks in and starts shooting. As the day progresses and the body count rises, Matt finds himself locked inside with four fellow employees—and no discernible way out. Matt soon realizes K-Rad has more in mind than killing his co-workers…he’s using the chemicals available to blow the plant, and several square blocks of surrounding businesses and residences, sky high. But just when Matt thinks things can’t get any worse, Mr. Dark steps into the game, raising the stakes in a gruesome and horrifying way. Fire and Ice delivers the non-stop action, high body count, and edgy thrills that make The Dead Man series impossible to put down.

Just when I thought the Mr Dark series might loose its momentum and bore, it deliverd a rip-roaring fast paced story again. Doctor Doom is still on the scene. What he touchs turns to decay and Matt Cahill armed with a razor sharp axe has the ability to see those infected by Mr. Dark’s evil energy.
K.Rad is what he wants to be known as, a killing machine trying to claim fame for himself. In reality he is Kevin Radowski a fired factory plant worker who is now even more full of rage and pent up on causing havoc on his ex-workplace. With Mr.Darks influence all in his path will be destroyed, he will do what he does best and multiply the evil in Kevin into a vehicle of rage, macabre and mayhem.
Matt Cahill is the people’s only hope.
This was a fun page-turning series delivered in a short, sharp and deadly fashion. The narrative was flowing and short to the point, Matt cahills axe was sharp as hell and the deadly side was the psychopath K.Rad teamed up with Mr.Dark.

A Q&A with Jude Hardin

Question: You’ve had so many jobs…professional drummer, bartender, avionics technician, carpet cleaner, chemical plant supervisor, substitute teacher, and registered nurse. Did it take a while to “find yourself” and have you finally succeeded in your quest?

Jude Hardin: Ha! Maybe I was trying to find myself, or maybe I just can’t hold a job. But really, I’ve always been a writer, even though I’ve mostly paid my bills doing other things. I went to the University of Louisville right out of high school and earned my bachelor’s in English, and from there I didn’t really know what to do to make money. I tried freelancing for the Louisville newspaper for a while, but spending two weeks on a feature article and then getting paid $50 wasn’t cutting it. I bartended for a while and then joined the Navy and learned electronics, and after the Navy I went back to bartending and did some other things and finally went back to school for a nursing degree. I’ve been working as an RN for fifteen years; but, through everything I’ve done, since I started working on My English degree when I was eighteen, really, I always thought I would sit down some day and write the great American novel. When I turned forty-three, I figured I better get started before it was too late. I thought it would be easy. I thought I would write a book and send it out to publishers and they would line up with their checkbooks and fight over it. I was deluded, of course. It wasn’t easy, at all, and nobody fought over that first book. Or the second. Or the third.

Q: How did you get involved in The Dead Man series and what attracted you to it?

JH: It was really quite a coincidence. I was working on a horror novella called Unborn at the time with the intention of self-publishing it, and I thought I might like to collaborate with someone else on a different self-publishing project. I approached author J. A. Konrath and asked if he would be interested. He had too many other things going on at the time, but he knew that his friends Lee Goldberg and William Rabkin were rounding up a posse of writers for a series of action-adventure/horror novellas. He gave me Lee’s email address, and I sent him a short query and he agreed to take a look at the first few chapters of Unborn to see if I might be a good match. I sent the chapters and he wrote me back the same night and offered me the Dead Man gig. I was ecstatic and accepted without hesitation.

Q: Is it hard writing a book in a series that you didn’t create? What have you learned from it?

JH: It was harder than I thought it was going to be. Nobody, and I mean nobody, knows a character like the author who created that character. It’s sort of jarring, like you’re not in Kansas anymore. Lee Goldberg and William Rabkin loved my villain right away, but it took me longer to nail the main characters in the series–their characters. Lee and Bill are television writers, so it was interesting developing the story with them from that perspective. It was a great experience.

Q: How much does Fire & Ice draw on your own experience working in a chemical plant?

JH: Most of the action in Fire and Ice takes place inside the plant, so I used my memory from a job I had in the early-to-mid 90s to construct the setting. I worked there for three years. It was a big steel building with no climate control, and I can still feel the heat of the place in the summer and the cold in the winter and the noise and the smell. I often draw on real-life experiences when composing my fiction, and I think it adds a certain verisimilitude for the reader–a portal to what John Gardener calls the fictional dream–that looking things up on Google can’t always match.

JH: I recently signed a multi-book deal for my Nicholas Colt thriller series, so that’s going to keep me busy for at least the next couple of years. Colt is the main character in Pocket-47, my debut novel. New York Times bestselling author Tess Gerritsen says, “POCKET-47 sucked me in and held me enthralled. Author Jude Hardin keeps the pace frantic, the thrills non-stop, but best of all is his hero, the wonderfully ironic Nicholas Colt. This is a character I’m eager to follow through many adventures to come.” So that’s what’s next up for Colt and me–many adventures to come!