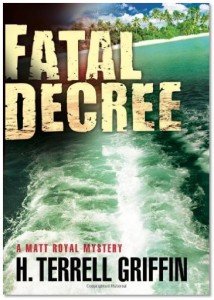 When a serial killer shows up on Longboat Key, Florida after a twelve year absence, Matt Royal is stymied. The first woman killed on Longboat Key has ties to a secretive government agency for which Matt’s best friend Jock Algren works. Was this a coincidence or was she a targeted kill? Matt’s friend, Longboat Key detective Jennifer Diane (J.D.) Duncan investigates the murders but also seems to be a target of the killer. Why? And where has the killer been for the past twelve years? And why has he come to Longboat Key when his earlier kills were all in Miami? The mystery deepens when Guatemalan gang-bangers try to kill Matt and J.D. and suspicions grow that Mexican drug cartels are somehow involved. The director of Jock’s agency orders him to do whatever is necessary to find the killer because of the death of the woman with connections to the agency. Will Jock simply take out the murderer or allow J.D. and the law to arrest, try and convict the bad guys? Matt’s life is further complicated by J.D.’s growing dissatisfaction with island living and her thoughts of returning to Miami.

A one Matt Royal resident of an island in Florida, Longboat Key, can be found running in sandy beaches or in the midst of crime detection along with his female friend J.D.
In this story he finds himself working alongside a best friend Jock Algren a government agent.
The body count rises in this police procedural thriller and fingers point to a serial killer and then other people are killed that don’t fit the pattern and turns the investigation down the road of a cop killer and possible drug cartel.
The story is layed out in an easy read style, the right length sentences and short chapters in a style and manner you expect for this kind of story to move with the right place.
The mystery, the search for truth creates a great need to get through story with intrigue i found that the main character Matt Royal and J.D may grow on me and will be hoping to read more from these characters in other stories the author features them in.

Reviewed by Lou Pendergrast on 30 January 2013