Review : Down the River unto the Sea by Walter Mosley - More2Read

Down the River unto the Sea by Walter Mosley 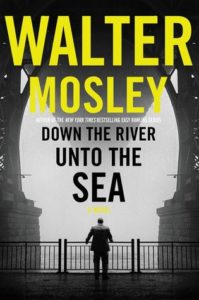 Down the River unto the Sea by Walter Mosley :

Joe King Oliver was one of the NYPD’s finest investigators, until, dispatched to arrest a well-heeled car thief, he is framed for assault by his enemies within the NYPD, a charge which lands him in solitary at Rikers Island.

A decade later, King is a private detective, running his agency with the help of his teenage daughter, Aja-Denise. Broken by the brutality he suffered and committed in equal measure while behind bars, his work and his daughter are the only light in his solitary life. When he receives a card in the mail from the woman who admits she was paid to frame him those years ago, King realizes that he has no choice but to take his own case: figuring out who on the force wanted him disposed of–and why.

Running in parallel with King’s own quest for justice is the case of a Black radical journalist accused of killing two on-duty police officers who had been abusing their badges to traffic in drugs and women within the city’s poorest neighborhoods.

Joined by Melquarth Frost, a brilliant sociopath, our hero must beat dirty cops and dirtier bankers, craven lawyers, and above all keep his daughter far from the underworld in which he works. All the while, two lives hang in the balance: King’s client’s, and King’s own.

“Walter Mosley is back with a whole new character to love. . . . As gorgeous a novel as anything he’s ever written. And with Joe King Oliver I’m betting, and hoping, he’s given us a character we haven’t see the last of.”-Richard Lipez, Washington Post

“Rekindles some of the remarkable energy that drove the early Rawlins novels. . . . Mosley writes with great power here about themes that have permeated his work: institutional racism, political corruption, and the ways that both of these issues affect not only society at large but also the inner lives of individual men and women. And he has created a new hero in Joe Oliver with the depth and vulnerability to sustain what readers will hope becomes a new series. . . . It’s the perfect moment for Mosley to unveil an exciting new hero and a series set in the present and confronting the issues that drive today’s headlines.”-Booklist (starred review)

” An excellent standalone . . . The novel’s dedication–to Malcolm, Medgar, and Martin–underlines the difference that one man can make in the fight for justice.”-Publishers Weekly (starred review)

“A heady stew of racial politics and seedy characters that Mosley’s fans are sure to eat up.”-AARP

“It’s Mosley’s signature style–rough-hewn, rhythmic, and lyrical–that makes you ready and eager for whatever he’s serving up. . . . Let the good times roll.”-Kirkus Reviews

“Mosley’s poetic descriptions of not only New York City but his character’s deepest souls elevate the story to beauty. Although the characters, large and small, are all compelling, in the end it is King’s story to tell, as he struggles to decide how much he’s willing to risk to get the truth.”-Strand Magazine

“Mosley’s newest standalone has the markings of a classic hard-boiled New York novel… It’s also a poignant page-turner whose larger themes–corruption, institutional racism, and the horrors of solitary confinement–speak to some of today’s most pressing issues.”-Charles Perry, LitHub

“An engaging standalone . . . Mosley fans will welcome another imaginative page-turning from a mystery grand master.”-Library Journal

First person narrative of a man not in blue no more and then orange and then as a pi from Queens in a one man service, King Detective Service.
There are simple truths and there are more complex truths and there is freemen in sense of no longer in prison and following his days to exonerate himself and another in a case brought to his attention.
The author successfully engages the reader and walking in this protagonists shoes at odds with conflicts and the dealings with the discoveries and how and why there can be any exonerations.
Our pi is up against it, caught in a web of conspiracy and corruption that spread far and wide.
Clear and present dangers within, inner-city men in need for survival with some hard choices to be made, clear and present skill and mastery in telling from Walter Mosley.
A seasoned writer with a well seasoned pi tale of redemption revitalised in a Walter Mosley strain of telling.

“Never, not once, did they take me from that cell. In there I craved a newspaper or a book…and a light to read by. Bunged up in solitary confinement I fell in love with the written word. I wanted novels and articles, handwritten letters and computer screens filled with the knowledge of the ages.”

“Getting me put in solitary rescued me from becoming a murderer, and then later, when I couldn’t raise enough money for rent and child support, he came up with enough cash for me to start the King Detective Service. He even guided the first few clients my way.”

“For the past week or so I’d been reading the nearly hundred-year-old novel All Quiet on the Western Front. There was a character in there who reminded me of Glad; Stanislaus “Kat” Katczinsky. Kat could find a banquet in a graveyard, a beautiful woman in a bombed-out building. When the rest of the German army was starving, Kat would show up to his squad with a cooked goose, ripe cheese, and a few bottles of red wine.”

“The dollar is my master, but I ain’t no slave,”

“Stuart Braun was the radical lawyer-celeb who was representing A Free Man, a black militant journalist who had been arrested for the killing of two police officers three years earlier. Born Leonard Compton, Man was found seriously wounded a few blocks from the shoot out, in the Far West Village. The gun he had on him was the one used in killing the officers. The bullets had passed clean through his body so the guns that shot him could not be identified.”

“Man refused to implicate anyone else who might have been with him that night and denied having anything to do with any murders. He was facing the death penalty, which New York State provides for cop killers. He showed no remorse and, in general, refused to cooperate with the police or prosecutors. Before Braun got involved it seemed pretty clear that New York was going to have its first execution in a very long time.”

“That Man and his crew were fighting a prostitution ring?” “Not just that,” she said. “Not just that. Manny says that the cops were involved in all kinds of criminal activities. There was stolen merchandise, drugs, and murders. People were being killed if they tried to stand up to them.”

“I was born to be an investigator. For me it was like putting together a three-dimensional, naturalistic puzzle that in the end would be an exact representation of the real world.”

“I had thirteen years on the force, six of those as a detective”

Reviewed by Lou Pendergrast on 23 February 2018