The Double by Jose Saramago 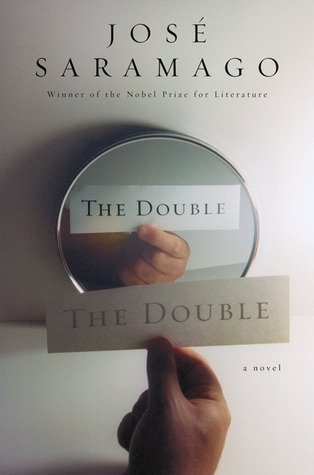 The inspiration for the major motion picture “Enemy” starring Jake Gyllenhaal and directed by Denis Villeneuve
Tertuliano Máximo Afonso is a divorced, depressed history teacher. To lift his spirits, a colleague suggests he rent a certain video. Tertuliano watches the film, unimpressed. But during the night, when he is awakened by noises in his apartment, he goes into the living room to find that the VCR is replaying the video. He watches in astonishment as a man who looks exactly like him-or, more specifically, exactly like he did five years before, mustachioed and fuller in the face-appears on the screen. He sleeps badly.
Against his better judgment, Tertuliano decides to pursue his double. As he roots out the man’s identity, what begins as a whimsical story becomes a “wonderfully twisted meditation on identity and individuality” (The Boston Globe). Saramago displays his remarkable talent in this haunting tale of appearance versus reality.

“…tell her the whole story from the beginning, about this extraordinary singular, astonishing, and never-before-seen case of the duplicate man, the unimaginable become reality, the absurd reconciled with the reason, the final proof that for God nothing is impossible, and that the science of this century is, as someone said, a fool.”

This is, a tale of double existence, a meditation on words, on numbers, on identity, on the self and existence of being.
And a damn great thriller.

The tale, before it begins, the author has given you a hint and a warning that you are not only about to be immersed in a great Saramagian tale with careful deliberately placed words, long drawn sentences, that have you hooked in the scene, in the moment, in the breathe, and then has you turned on your axis, with his fables and the surreal, food for thought consciousness, But That in this hint, the Epilogue, in those couple of sentences, there is a pointing to some formulae at play in his tale, and have some connection to what you are about to read, let me repeat for you now:

“Chaos is merely order waiting to be deciphered.”
-The Book of Contraries

“I believe in my conscience I intercept
many a thought
which heaven intended for another
man.”
-Laurence Sterne,
The Life of Opinions of Tristram Shandy

Take note that Maria de Paz, the main protagonist’s lover, who happens to work in a bank dealing with numbers and order, will mention “Chaos is merely order waiting to be deciphered”.
Also something that may have another linking theme, one that one may take second look at, is the fact that the whole knowing of the existence of this double came about the recommendation of one Maths Teacher. This history teacher works with him in a secondary school, a maths teacher, another one that deals with some kind of order and numbers, recommended him to watch the movie that his double appears in.
Ideology signals but are they pertinent?
The world in this tale seems to point to the case of free will, in all the order of numbers and words, chaos of probability, the author immerses you in identities changing at the choice of the self.
The common sense of the main protagonist, Tertuliano Maximo Alfonso, has its own voice appearing in the narrative as a separate character of the main protagonist talking to him and helping him in making his next move.
I could compare the tale to like that of a chess game.
As in a chess game, this tale slowly has moves made to a position of checkmate, one eventually learning what move was to be made next and what had to be done to achieve that checkmate, when probability occurred and made its move howsoever ludicrous and darkly humorous it appeared in forms to him, eventually, he knew from history, of how to achieve check mate.

There are many things left for after thought. I watched the movie adaptation after reading this novel the first time, then for the review, I read it a second time, one question that may be further thought over is that of a hypothesis, do products of the mind have a certain capacity of taking a material form in this tale?

If his flowing writing style, his easy reading narrative, the dilemma and thrill of what will happen next, for instance when the doubles meet, doesn’t have great reading glue and have you in the tale, then his play with identity, number, words, nouns, ideology, conscious, and chaos with order and its deciphering, may do, or simply the words he lays out with careful creative genius does not have you, even the love element that exists fails, then I don’t know what will. A great tale to read many times over from one superb craftsman with words.

“He had gone back to the first image, the one in which the clerk at the reception desk, in close-up, is looking directly at Ines de Castro, and he was minutely analysing the image, line by line, feature by feature, Apart from a few slight differences, he thought, especially the moustache, the different hairstyle, the thinner face, he’s just like me. He felt calmer now, the resemblance was, to say the least, astonishing, but that was all it was, and there’s no shortage of resemblances in the world, twins for example, the really amazing thing would be that out of the six thousand million people on the planet there weren’t two people exactly alike.”

“We all know that each day that dawns is the first for some and will be the last for others, and that for most people it will be just another day.
For the history teacher Tertuliano Maximo Alfonso, this day in which we find ourselves, in which we continue to exist, since there is no reason to believe it will be our last, will not be just another day. One might say that it appeared in the world with possibility of being another first day, another beginning, and indicating, therefore, another destiny. Everything depends on what steps Tertuliano Maximo Afonso takes today. However, the procession, as people used to say in times gone by, is just about to leave the church. Let’s follow it.”

“We have an odd relationship with words. We learn a few when we are small, throughout our lives we collect others through education, conversation, our contact with books, and yet, in comparison, there are only a tiny number about whose meaning, sense, and denotation we would have absolutely no doubts if, one day, we were to ask ourselves seriously what they meant. Thus we affirm and deny, thus we convince and are convinced, thus we argue, deduce, and conclude, wandering fearlessly over the surface of concepts about which we have only the vaguest of ideas, and, despite the false air of confidence that we generally affect as we feel our way along the road in the verbal darkness, we manage, more or less, to understand each other and even, sometimes, to find each other. If we had time and if impatient curiosity were to prick us, we would always end up finding out exactly what a monkfish was. The next time the waiter at the restaurant suggests this inelegant member of the Lophiidae family, the history teacher will know what to say, What, that hideous benthonic creature that lives in the sand or on the muddy sea bottom, and will add firmly, Certainly not.”

“Chance, however, chose, although it would be more exact to say that it was inevitable, since alluring concepts like fate, fortune, and destiny really have no place in this narrative,..”

“The list of names was swiftly locked away in a drawer, the loose videos were returned to their respective boxes, and The Parallel of Terror, which is still in the video player, followed the same route, it hadn’t been so easy to impose order on chaos since the world began. Experience has taught us, however, that there are always a few ends left untied, always some milk spilled along the way, always a line that comes out of alignment, which, when applied to the situation under scrutiny, means that Tertuliano Maximo Afonso is aware that his war is lost even before it’s begun. The way things stand now, thanks to the sovereign stupidly of his speech on ideological signals, and after her masterstroke, that comment about the existence of order in chaos, of a decipherable order, it is impossible to tell the woman who is now in the kitchen making coffee, Our relationship has come to an end,…”

“According to popular wisdom, you can’t have everything, and there’s a good deal of truth in that, the balance of human lives is constantly swinging back and forth between what is gained and what is lost, the problem lies in the equally human impossibility of coming to an agreement on the relative merits of what should be lost and what should be gained, which is why the world is in the state it’s in.”

“..,I still think you should forget all about this business of doubles, twins, and duplicates, Maybe I should, but I can’t, it’s something that’s stronger than me now, My feeling is that you’ve set in motion a great crushing machine that is slowly advancing toward you, warned common sense, but since his companion did not reply, he withdrew, shaking his head, saddened by the outcome of the conversation.”

“What he absolutely does not understand, however much he cudgels his brain, is why it is that while communication technologies continue to develop in a genuinely geometric progression, from improvement to improvement, the other form of communication, from me to you, from us to them, should still be this confusion crisscrossed with culs-de-sac, so deceiving with its illusory esplanades, and as devious in expression as in concealment.”

Reviewed by Lou Pendergrast on 25 October 2014