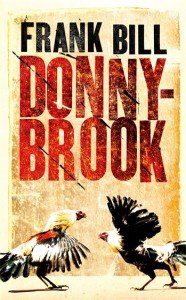 The raw and as-insane-as-anticipated first novel from Frank Bill, author of Crimes in Southern Indiana

The Donnybrook is a three-day bare-knuckle tournament held on a thousand-acre plot out in the sticks of southern Indiana. Twenty fighters. One wire-fence ring. Fight until only one man is left standing while a rowdy festival of onlookers—drunk and high on whatever’s on offer—bet on the fighters.
Jarhead is a desperate man who’d do just about anything to feed his children. He’s also the toughest fighter in southeastern Kentucky, and he’s convinced that his ticket to a better life is one last fight with a cash prize so big it’ll solve all his problems.
Meanwhile, there’s Chainsaw Angus—an undefeated master fighter who isn’t too keen on getting his face punched anymore, so he and his sister, Liz, have started cooking meth. And they get in deep. So deep that Liz wants it all for herself, and she might just be ready to kill her brother for it. One more showdown to take place at the Donnybrook.
As we travel through the backwoods to get to the Donnybrook, we meet a cast of nasty, ruined characters driven to all sorts of evil, all in the name of getting their fix—drugs, violence, sex, money, honor. Donnybrook is exactly the fearless, explosive, amphetamine-fueled journey you’d expect from Frank Bill’s first novel . . . and then some.

“A dark and brutal debut. Donnybrook is a bellow of rage from the American heartland, and Bill is the new bard of the disaffected rural underclass.”
-Roger Smith, author of Wake Up Dead

“Good Lord, where in the hell did this guy come from? Blasts off like a frigging rocket ship and hits as hard as an ax handle to the side of the head after you’ve snorted a nose full of battery acid. One of the wildest damn rides you’re ever going to take inside a book.”
—Donald Ray Pollock

Grabs you by the jugular into one helluva wild ride and wont let go till its final page.

Delivering words in sentences with precision and control that set the scene, sometimes in rapid fire motion.

Darker than dark, a world unto its own with characters and happenings that rise up from the pages and will fester in your mind with vivid and powerful images of a feast of grit, blood and sweat.

Frank Bill has won with the great characters and visceral storytelling that he has forged in this story Donnybrook.

There is one tough man, Jarhead, who wants to do good for his family he’s fighting a dark fate that has passed and trying to change the tide of his future in earning a sum of dollars in a fight show unlike any other. This show down out in the middle of a heavily guarded fortress makes the fight in Fight Club seem like a kindergarten brawl due to the ungodly rules and players.

There are badder guys than the Jarhead who have no rules and partake in all bad things under the sun just waiting to be taken out by many a enemy.

Angus is one, a force to be reckoned with and then there an Asian guy Fu who is lethally trained in all the arts of taking an opponent out for the count.

The author has laced all the characters and occurrences with spot on sparse, showing sentences, dialogue and a great usage of similes.

The kind of story, I feel, that could be compared to the characters, story, dialogue and prose to the novels Savages by Don Winslow, A Feast of Snakes by Harry Crews, and Devil all The Time by Donald Ray Pollock.

“The man held scars. One side of his complexion had been hazed by flame. His hair raked back into a ponytail that twisted down his spine. Dye-engraved names were about his flesh like a newspaper headings. He was a fighter, or had been a fighter. He was a man who’d tried to salvage what he could from life. He was hard and merciless. Then his image faded. Purcell lay in his hammock of wove rope. He’d a cigarette dangling in his right hand. Trees above offering shade. “Ballard of the Crimson Kings,” a tune by Ray Wylie Hubbard, rustled in the warm breeze from a CD player on Purcell’s screened-in porch. Guitar strings and banjo were being picked. Images of Jarhead ran like adrenaline in his veins. Then came the face of another man who went by Knox, Miles Knox. He and the boy Jarhead could’ve been twins except for age. Purcell hadn’t realized until now how much they favoured each other. He didn’t know the man on a personal note. Bur he’d crossed paths with him at social gatherings where ooze and talk were being passed.”

“Twenty fighter entered a fence-wire ring. Fought till one man was left standing. Hordes of onlookers-men and women who used drugs and booze, wagered and grilled food-watched the fighting. Two fights Friday. Four Saturday. The six winners fought Sunday for one hundred grand.

The two jobs Jarhead worked, towing for a junkyard during the day, then flipping burgers and waffles two or three nights a week, hardly provided enough cash to feed and clothe his two smiling-eyed progeny. Boys created with the comeliest female in the Kentucky hills, Tammy Charles.

In between his jobs he jogged through the Kentucky mining hills that gave his stepfather black lung and his mother gun-powder suicide. He pounded the homemade heavy bag that hung from a tree in front of his trailer till his hands burned red. Training for his next bare-knuckle payday out in an abandoned barn or tavern parking lot. Farmers. Miners. Loggers. Drunks. Wagering on another man’s will.

Donnybrook would be Jarhead’s escape from the poverty that had whittled his family down to names in the town obituaries. He just needed the thousand-dollar fighter’s fee to enter.”

“He had on each inner forearm a tattoo that signified his tutelage in a faraway school. A monkey branded his right. A snake branded his left. Mr Zhong, he knew, had the same tattoos under his sleeves.”

“Raw light from the ceiling caught his face, highlighted the putty-like scars from years of offensive training as a boy. The knuckles of each hand were flat as the wood and bamboo he’d conditioned them against years ago. His forearms and shins were the same. Years of bones being pounded. Nerve endings numbed. Conditioned into steel.”

Reviewed by Lou Pendergrast on 18 February 2013