Dominion: An Anthology of Speculative Fiction from Africa and the African Diaspora edited by Zelda Knight and Oghenechovwe Donald Ekpeki. 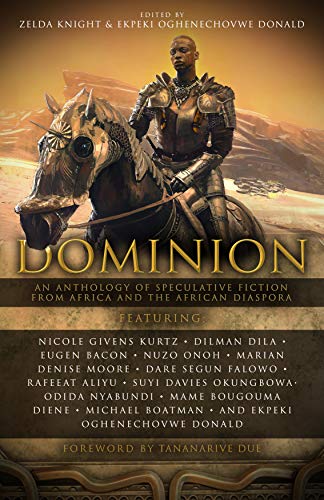 Dominion is the first anthology of speculative fiction and poetry by Africans and the African Diaspora. An old god rises up each fall to test his subjects. Once an old woman’s pet, a robot sent to mine an asteroid faces an existential crisis. A magician and his son time-travel to Ngoni country and try to change the course of history. A dead child returns to haunt his grieving mother with terrifying consequences. Candace, an ambitious middle manager, is handed a project that will force her to confront the ethical ramifications of her company’s latest project—the monetization of human memory. Osupa, a newborn village in pre-colonial Yorubaland populated by refugees of war, is recovering after a great storm when a young man and woman are struck by lightning, causing three priests to divine the coming intrusion of a titanic object from beyond the sky.

A magician teams up with a disgruntled civil servant to find his missing wand. A taboo error in a black market trade brings a man face-to-face with his deceased father—literally. The death of a King sets off a chain of events that ensnare a trickster, an insane killing machine, and a princess, threatening to upend their post-apocalyptic world. Africa is caught in the tug-of-war between two warring Chinas, and for Ibrahim torn between the lashings of his soul and the pain of the world around him, what will emerge? When the Goddess of Vengeance locates the souls of her stolen believers, she comes to a midwestern town with a terrible past, seeking the darkest reparations. In a post-apocalyptic world devastated by nuclear war, survivors gather in Ife-Iyoku, the spiritual capital of the ancient Oyo Empire, where they are altered in fantastic ways by its magic and power.

“[The Dominion Anthology] contains an explosion of new voices and creativity from all across the diaspora. It’s a feast of ideas that connects the old and the new, a song of new songs, and an exciting new collection of writers that I expect we’ll see even greater things from in the near future.”
– Tobias S. Buckell, New York Times Bestselling, World Fantasy Award-winning, Hugo and Nebula Nominated Author

Dare Segun Falowo is a writer of the Nigerian Weird. His work draws on Yoruba cosmology, old Nollywood and pulp fiction. He has been published in The Magazine of Fantasy and Science Fiction, Brittle Paper, the Dark and Saraba Magazine. He haunts Ibadan and tweets @dragonsinlagos.

Dilman Dila is a writer, filmmaker, and author of a critically acclaimed collection of short stories, A Killing in the Sun. His works have been listed in several prestigious prizes, including a nomination for the British Science Fiction Association (BSFA) Awards (2019), a long list for BBC International Radio Playwriting Competition (2014), and a short list for the Commonwealth Short Story Prize (2013). My short fiction and non-fiction writings have appeared in several magazines and anthologies, including Uncanny Magazine, A World of Horror, AfroSF v3, and the Apex Book of World SF 4. His films have won many awards in major festivals on the African continent.

Ekpeki Oghenechovwe Donald is a Nigerian writer and editor, who studied law at the University of Lagos, Nigeria. The Nommo Awards–hosted by the African Speculative Fiction Society, which recognizes works of speculative fiction by Africans–awarded him the Best Short Story Award for his short story “The Witching Hour.”

He has also been recognised by the L. Ron Hubbard Writers of the Future Contest, which awarded him two Honourable Mentions. His award winning short story The Witching Hour, published in Cosmic Roots and Eldritch Shores made the Tangent Online recommended reading list for 2018 with two stars. He has been published in Dwart online, Anotherealm, African Writer, Strange Horizons and the Selene Quarterly.

He is a member of the African Speculative Fiction Society, Codex and the SFWA, and a first reader in SFF mags, Cosmic Roots and Eldritch Shores, and Strange Horizons.

Marian Moore converted a childhood love of science into a career in computing analysis.  Her love of literature led her to writing both poetry and fiction. Her poems have been published in periodicals ranging from Bridges to Asimov’s SF.  Her fiction has appeared in the anthology “Crossroads: Tales of the Southern Literary Fantastic” and the online journal, Rigorous-mag.com. While Marian did some writing while attending LSU-BR, she began to first sharpen her skills in George Alec Effinger’s UNO workshop and then in NOMMO Literary Society, led by the New Orleans writer and activist Kalamu ya Salaam.

By day, Michael Boatman pretends to be other people. He’s co-starred on television series like Instant Mom, Spin City, Arliss, and China Beach, and in films like Hamburger Hill, The Glass Shield and Second Chances. Currently, he can be streamed on the CBS ALL ACCESS drama, The Good Fight. By night, he sometimes writes vengeful flights of black-hearted hilarity. Novels: Revenant Road, Last God Standing, Who Wants To Be The Prince of Darkness? His stories have appeared in Weird Tales, Horror Garage, and in many anthologies. They can be found in his two collections, God Laughs When You Die, and 13: A Collection of Horror And Weird Fiction. He is the father of four. An angry Humanist plagued by road rage, he’s armed and always looking for the nearest “ON” ramp.

Nicole Givens Kurtz’s short stories have appeared in over 30 anthologies of science fiction, fantasy, and horror. Her novels have been finalists for the EPPIEs, Dream Realm, and Fresh Voices in science fiction awards. Her work has appeared in Stoker Finalist, Sycorax’s Daughters, and in such professional anthologies as Baen’s Straight Outta Tombstone and Onyx Path’s The Endless Ages Anthology. Visit Nicole’s other worlds online at Other Worlds Pulp, www.nicolegivenskurtz.com.

Nuzo Onoh is a Nigerian/British writer of African Horror. She holds a law degree and a master’s degree in Writing, both from The University of Warwick, United Kingdom.

Dubbed “The Queen of African Horror” by fans and media, Nuzo has featured on multiple media platforms, as well as delivered talks and lectures on African Horror at numerous venues, including the prestigious Miskatonic Institute of Horror Studies, London. Nuzo is included in the reference book, “80 Black Women in Horror” and her contest-winning short story, “GUARDIANS”, which featured in The Asterisk Anthology: Volume 2, is the first African Cosmic horror story to be published. Her works have also been referenced in academic literary studies such as “Routledge Handbook of African Literature” and “Fascist Ghosts: Racism and the Far Right in British Horror”.

Nuzo’s stories have featured in multiple anthologies and magazines. She lives in the West Midlands with her cat, Tinkerbell.

Odida Nyabundi is a reader, writer, and blogger who works as a copywriter in the advertising world. He holds a bachelors degree in communication from Maseno University and has two blogs: Cartastrophe about his enduring passion for cars, and Freeze Frame which takes a gritty look at various snippets of life usually through a supernatural lens. Odida has also published four short stories in Manure Fresh, which is a local Kenyan publication that showcases up and coming writing talent on sale in Nairobi.

Odida has been writing from as long as he can remember. He has also dabbled in many things including stints as a broadcast reporter, a butcher, and a beekeeper. He loves science fiction, fantasy ,and horror, and has an abiding interest in African culture and folklore.

Rafeeat Aliyu is a writer and documentary filmmaker based in Abuja, Nigeria. Her short stories have been published in Strange Horizons, FIYAH, Nightmare, Expound and Omenana magazines, as well as Queer Africa 2 and the AfroSF Anthology of African Science Fiction anthology. Rafeeat is a Clarion West Graduate (2018). You can learn more about her on her website rafeeataliyu.com.