Book Review: Do You Mind If We Dance With Your Legs? by Michael Cisco - More2Read

Do You Mind If We Dance With Your Legs? by Michael Cisco 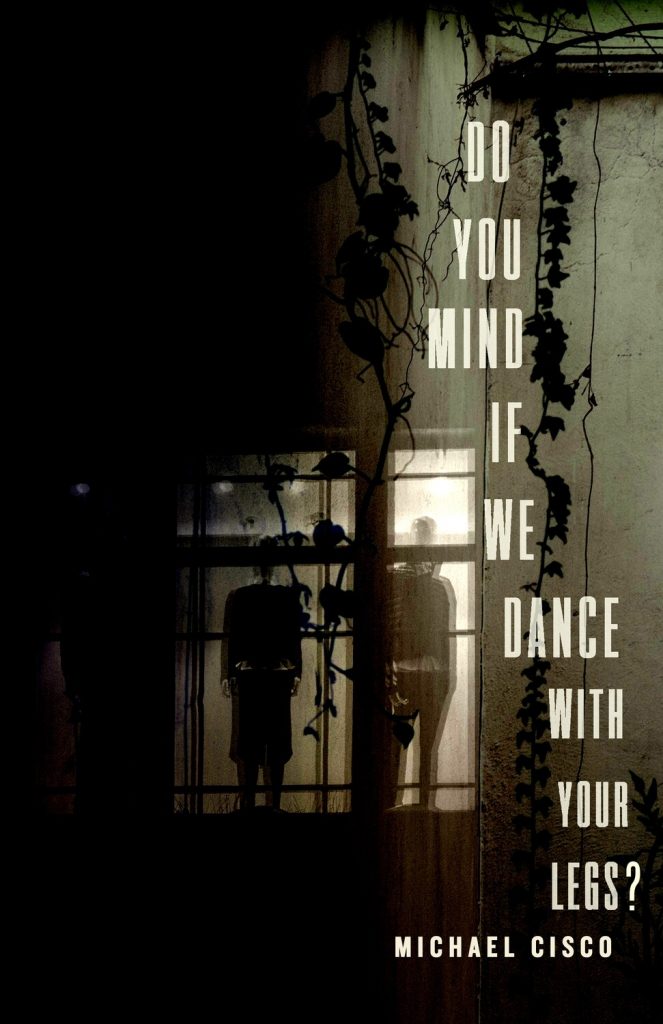 “Michael Cisco’s works immerse the reader in worlds that are not simply dreamlike in the quality of their imagination but somehow manage to capture and convey the power of the dream itself.”
-Thomas Ligotti

“At this point, it appears Cisco is simply operating in a sphere that most weird fiction writers never reach, or attain only rarely, and is doing it effortlessly.”
–Weird Fiction Review

From Publisher page on this charity chapbook and contributors:

“Signed, numbered, and limited to 250 copies
$10 from each sale of this chapbook will go to the Los Angeles LGBT Center (Once sold out, a total of $2,500 will be donated to this charity!)”

“This chapbook sports this unsettling cover by Don Noble and has spectacular interior color illustrations by Luke Spooner! “

He wanted to rescue Irene Trigg.
Pedrito dons a wig and clothing of women, he rides a bicycle.
People trying to change people and name calling but despite all this he gets through and believes in his self, he is intelligent but he has problem in attention and concentration.

Poetic dark exercise and portrait on how this likeable struggling soul sees things and battles with others unlike himself, betrayal in many forms in pursuit of a missing girl.
There are a few cryptic aspects within, this work an exercise maybe how he does succeed in proving something, that his way of dealing aspects of his life work, with his possibility chart for example, and ‘Nothing is beyond Principle” thoughts with “He is superstitiously regular in his routine.”

There are few things that point to the past and concentration issues then there is the hyperactivity and his constant racing on his bicycle, moving fast, and mind fleeting, and there are the voices too ones saying
“The center turn lane isn’t the bicycle lane!”
“20904”
When some things are withheld by the author in the telling you can different understandings/deciphering of the art and such is the beauty of the writing.

The humanness, the disquietness, and complexities await, deciphering needed with the reader with psychological potency work of cerebral and abstract prose art, the hallmarks of Michael Cisco writings.

I had to read another work of his after reading his new collection of stories to be released in April 2021 Antisocieties and I am not disappointed and will read another one soon.

“A joyous rush of vividness comes with it.  He looks out over the lights of Los Angeles, downtown rising like a luminous scepter far off in the distance and its arteries patched with orange lamps and streaming with glowing blobs;  it is a vast and beautiful abstraction, that is what he likes best about it.”

“Pedrito’s parents are hardworking, aggressively modest, resigned, sadly even-tempered, with a sort of touchingly careful whimsy that prompted them to name him Pedrito, his sister Bunny, and his brother, Sonny. “

“There’s something so evilly deceptive in the utterly deathlike inertia of these figures, who can spring to plausible life without warning, that Pedrito remains for what seems a long time awestruck, nearly as still as they are.  That’s not the stillness of death, but it isn’t the inanimate stillness of things either;  it’s a kind of lifeless expectancy unique to these –.  Any moment they will notice him and spring to life, turning to greet him with ordinary expressions on their inhuman faces, and he will go insane with terror.”

“Pedrito loses control of his imagination, and sees, or is shown, on all sides, a neighborhood of empty alleyways and empty rooms with people in them, motionless, lifeless, bizarrely heavy, unpeople gathering solidity and stillness and dire realness.
“Isn’t this your stillness, Pedrito?” This is a very carefully selected shaft, a specially envenomed bolt.”

“Now everything that just happened so long ago this afternoon rampages, boils up impossible to resist the realization that some inexplicable malignity just shat all over his life, took away everything he had and blighted the day, his family, human beings who betrayed him, his parents who betrayed him and who had been his one and only link with the already amorphous and menacing body of mankind, they were the only ones who ever understood or loved him, now replaced by the image of his blankfaced father slamming into him, the image of his blankfaced mother holding him down for his father to cut up, mechanically.”

“..voice is a curl of sweet sound in his ear, evil, coming from nowhere and the darkness and light of the day gambolling all around him.”

“Sitting under a tree in broad daylight Pedrito starkly sees that he is conversing with a voice from a pit of absolute and malignant neutrality untouched by light, not hot, not cold, not alive, not dead, a sterile, fatal sameness into which everything it encounters must dissolve, the source of a dulling alkali that seeps out in unseen places, behind once-human eyes, and rots away whatever it finds.”

Reviewed by Lou Pendergrast on 25 February 2021