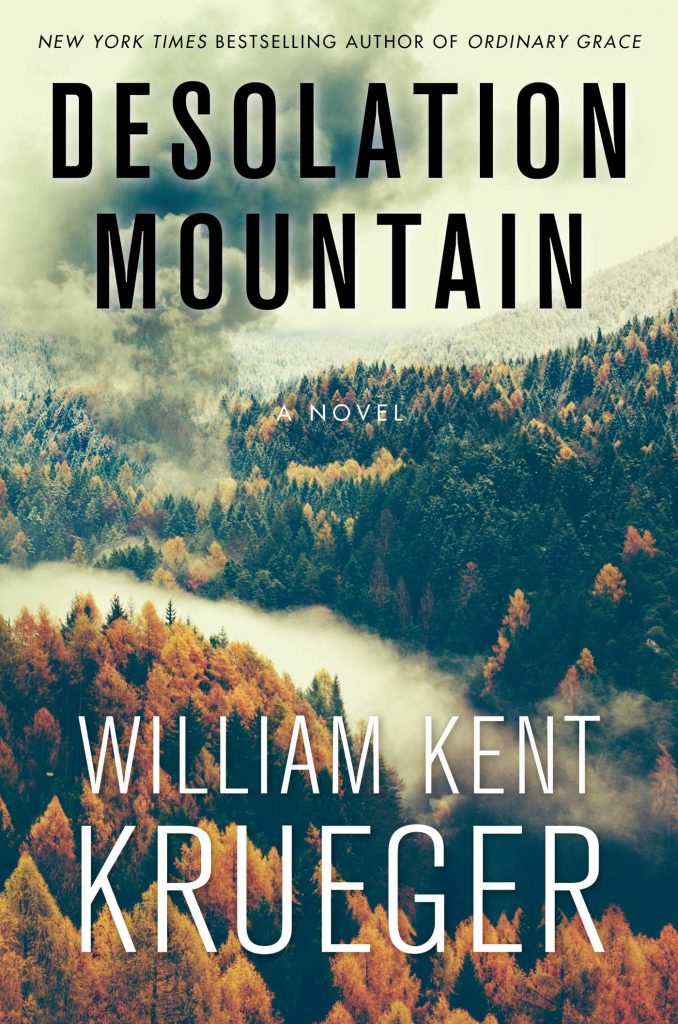 New York Times bestselling author William Kent Krueger delivers yet another “punch-to-the-gut blend of detective story and investigative fiction” (Booklist, starred review) as Cork O’Connor and his son Stephen work together to uncover the truth behind the tragic plane crash of a senator on Desolation Mountain and the mysterious disappearances of several first responders. This is a heart-pounding and devastating mystery the scope and consequences of which go far beyond what father or son could ever have imagined.

There are more things in heaven and earth, Horatio, than are dreamt of in your philosophy.

To Stephen O’Connor, Hamlet’s dour observation is more than just words. All his life, he has had visions of tragedies to come. When he experiences the vision of a great bird shot from the sky, he knows something terrible is about to happen. The crash of a private plane on Desolation Mountain in a remote part of the Iron Lake Reservation, which kills a United States senator and most of her family, confirms Stephen’s worst fears.

Stephen joins his father, Cork O’Connor and a few Ojibwe men from the nearby Iron Lake reservation to sift through the smoldering wreckage when the FBI arrives and quickly assumes control of the situation. What seems like the end of the O’Connors’ involvement is, however, only the beginning of a harrowing journey to understand the truth behind the Senator’s death. As he initiates his own probe, Cork O’Connor stumbles upon a familiar face in Bo Thorson, a private security consultant whose unnamed clients have hired him to look quietly into the cause of the crash. The men agree to join forces in their investigation, but soon Cork begins to wonder if Thorson’s loyalties lie elsewhere.

In that far north Minnesota County, which is overrun with agents of the FBI, NTSB, DoD, and even members of a rightwing militia, all of whom have their own agendas, Cork, Stephen, and Bo attempt to navigate a perilous course. Roadblocked by lies from the highest levels of government, uncertain who to trust, and facing growing threats the deeper they dig for answers, the three men finally understand that to get to the truth, they will have to face the great menace, a beast of true evil lurking in the woods—a beast with a murderous intent of unimaginable scale.

“Krueger skillfully combines the otherworldly setting of the Minnesota wilds with Native American lore to create a winning mystery with more than a few surprises.” (Publishers Weekly)

“Krueger is adept at fusing shocks with setting…Great atmosphere, both physical and cultural.” (Booklist)

This tale could have been named To Kill an Eagle.
There is tragedy on Devil’s Eye.
“On official maps, Desolation was the name of the mountain, but the Ojibwe called it Majimanidoo-oshkiinzhig, which meant, more or less, Devil’s Eye.”
We are back again with our main protagonist Cork O’Connor, he is married to Rainy Bisonette, she’s a healer, his son Stephen has visions, dreams, many monstrous, and one truly haunting him till the end of this tale.
Cork, a sheriff no more, maybe still ogichidaa/warrior, a businessman now, has a place of dining called Sam’s place, and in the back, in his office, he keeps his few private investigations going.
Bo Thorson, also an interesting character, former Secret Service and now into private security work, plays another key role in this story, of whom the author casted in a stand-alone thriller The Devil’s Bed.
A senator’s plane goes down and strange things are occurring, people from all over investigating the downed plane and many mysterious people merging Desolation Mountain.
People from the NTSB, FBI, DoD, the Lexington Brigade, Byrd Industries.
Some others more mysterious.
With all the wisdom, mystery, and truths to be found out laid out in yet another fine mystery from an author who’s writing in same mastery as James Lee Burke and penned another must read with some great ingredients to have you hooked till the end.

“The eagle is sacred. Killing an eagle, that is a terrible thing.”

“The old man sat on the other side of the fire, listening. Old? He was ancient, with more years behind him than any living thing in the dark of that great forest—turtle, owl, deer, wolf, bear, all were children in comparison. The years, kind to no one, had done their best to weather his flesh, weaken his muscle, erode his bone. His body displayed none of the power and comeliness that had so marked it when the twentieth century was young. Time had etched lines long and deep into his face. His white hair hung over his shoulders in spidery wisps. The weight of ten decades of living had bent his spine, but only slightly. In the firelight, he appeared to be the ghost of a thing, not the thing itself.
And yet the young man who stared at him across the fire perceived only wisdom, only possibility.”

“Inside, the place smelled of deep-fry oil and of the meats that had sizzled on the griddle, decades of aromas soaked into the walls. The Quonset hut was divided into two parts. The front was Sam’s Place, with all the food prep equipment, big freezer, storage shelves, stainless-steel sink. The back was an office Cork used for both the business of Sam’s Place and his own work as a private investigator. There was a round table and four chairs, all of sturdy maple, old and worn. A little kitchenette with a small refrigerator, a microwave, a coffeemaker, counter space, sink. A couple of tall, gray file cabinets stood against the wall, one for documents pertaining to Sam’s Place, the other for the files related to Cork’s investigations. He didn’t advertise that side of his business doings anymore. He had a reputation. Those who needed him found their way.”

“Rainy Bisonette, Cork’s wife, worked at the tribal clinic in the town of Allouette on the Iron Lake Reservation. Trained as a public health nurse, she was also a member of the Grand Medicine Society, a Mide, a healer in the traditional way. They’d been married only since the previous April, not even six months. Still on honeymoon, Cork often thought, especially whenever he watched her shed her clothing.”

“With the exception of a few years as a cop in Chicago, he’d lived in Aurora, Minnesota, his whole life. His roots on his mother’s side went back to a time long before white men muscled their way into the North Country and began the destruction of the natural order, a ravaging that had never really ended. His Anishinaabe heritage might not show on his face, but it shaped his conscience. As he stood in the cool, evergreen-scented air, in the fresh feel of that fall morning, he understood the calm probably wouldn’t last.”

“They walked the logging road as it skirted the base of Desolation Mountain. Cork knew that in Alaska or Colorado or even Vermont they would laugh at the thought of calling this hump of gneiss a mountain. But it was the highest elevation in the county, a landmark that could be seen for miles. Although it was on the Iron Lake Reservation, it was a popular destination for photographers in the North Country, especially in the fall, when the view from the top was a stunning 360-degree panorama of color. Several small lakes were visible from the mountaintop. With binoculars, and if you knew where to look, you could see Ned and Monkey Love’s cabin, hunkered among the pines on a lake called Little Bass.”

“He considered Cork O’Connor, a man who had a built a life in one place and invested his heart in the people there. It was enticing, that comfortable, intimate existence, isolated from the world. Bo tried to imagine what it might have been like for him, had he made other choices. But that wasn’t who he was, or who he was ever likely to be. The kind of life Cork led, if it was threatened, became a dangerous entanglement. Once your heart was involved in life and death choices, you were vulnerable. Your heart got in the way of your head, clouded your judgment. It was a lesson Bo had learned the hard way. He liked Cork, liked that part of the family he’d met, but he kept the door shut on his heart. In the end, he needed to be prepared to sacrifice Cork. To sacrifice them all, if necessary.”