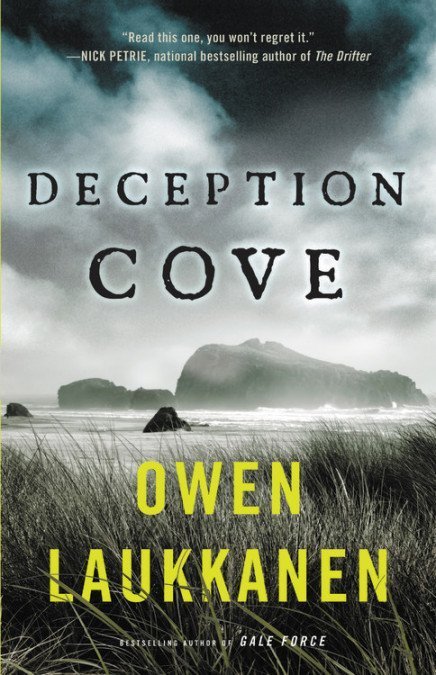 Former US Marine Jess Winslow reenters civilian life a new widow, with little more to her name than a falling-down house, a medical discharge for PTSD, and a loyal dog named Lucy. The only thing she actually cares about is that dog, a black-and-white pit bull mix who helps her cope with the devastating memories of her time in Afghanistan.
After fifteen years — nearly half his life — in state prison, Mason Burke owns one set of clothes, a wallet, and a photo of Lucy, the service dog he trained while behind bars. Seeking a fresh start, he sets out for Deception Cove, Washington, where the dog now lives.
As soon as Mason knocks on Jess’s door, he finds himself in the middle of a standoff between the widow and the deputy county sheriff. When Jess’s late husband piloted his final “fishing” expedition, he stole and stashed a valuable package from his drug dealer associates. Now the package is gone, and the sheriff’s department has seized Jess’s dearest possession-her dog. Unless Jess turns over the missing goods, Lucy will be destroyed.
The last thing Mason wants is to be dragged back into the criminal world. The last thing Jess wants is to trust a stranger. But neither of them can leave a friend, the only good thing in either of their lives, in danger. To rescue Lucy, they’ll have to forge an uneasy alliance. And to avoid becoming collateral damage in someone else’s private war, they have to fight back — and find a way to conquer their doubts and fears.

“A promising beginning to a new series . . . Fans of C.J. Box and Michael Koryta will enjoy the authenticity of this gut-wrenching story.”
-Booklist

“I could write pages singing the praises of Deception Cove’s vivid characters and ruthless pace–but here’s the short version: Owen Laukkanen sure as hell knows how to tell a story. Read this one, you won’t regret it.”
-Nick Petrie, national bestselling author of The Drifter

“Owen Laukkanen is a powerhouse writer, and Deception Cove cements that fact. Sharp, compelling, and loaded with a thriving setting and a conflicted, relatable protagonist — this is a harrowing story of redemption that feels intimate and cinematic at the same time. A must-read.”
-Alex Segura, author of Blackout

“In Deception Cove, Owen Laukkanen gives you everything you could want in a thriller — rich setting, breakneck pacing, thrilling action, a ton of heart, and a great dog. This is a cancel-your-plans-so-you-can-stay-in-to-read book.”
-Rob Hart, author of The Warehouse

Desperation and a need for saving reeling you in the formations of events unfolding, dog bonded with human with courage and empowerment, there will be a therapy dog in spot of trouble.

A companion animal, a VA doctor placed Lucy with Jesse an ex-marine, Lucy a therapy animal, a mutt partly American Staffordshire Terrier, saved from a den of fighting pit-bulls of many found dead.

Mason Burke, out from doing fifteen stretch inside trying to make a break, find some footing and worth.
Lucy the dog he trained as part of a jail rehabilitation program, he spent six months training this nervous dog and then the dog would go out and help others, is now in trouble and a situation arises to give him that meaning again like when he first partnered with Lucy.

Ex-con, ex-marine, ex-pit-bullfighting rescued dog, amidst a web of corruption and murder, with all the complexities and memories of shadows of the past and ones fortitude in making things right with saving and safety running through this tale.

Three broken hearts and souls need saving through tragedy and conflict with things turning bad on the island Deception Cove in this great tale pulling you in with hopes of justice and peace for the three by the end.
The author has crafted a solid tale successfully building empathy within reader for these memorable characters.