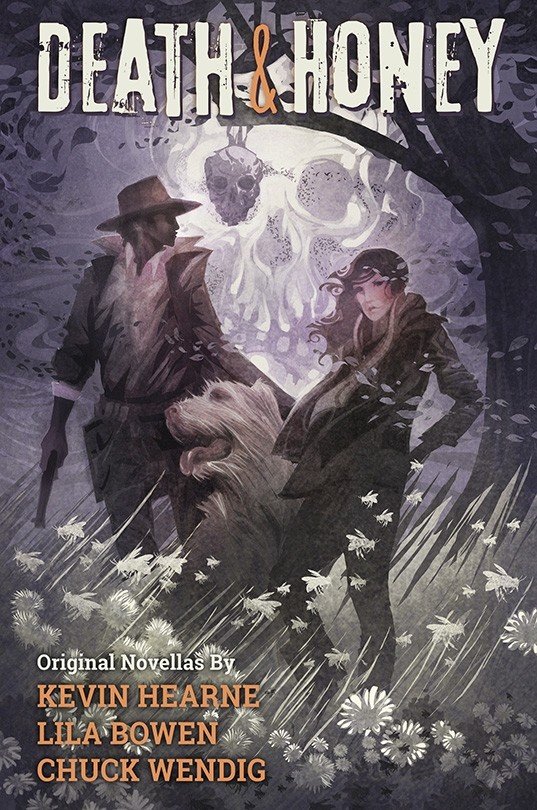 In The Buzz Kill by Kevin Hearne, Oberon the Irish wolfhound and Starbuck the Boston Terrier sink their teeth into a new Meaty Mystery when they discover a body underneath a beehive in Tasmania. It’s been badly stung, but the bees aren’t at fault: This is homicide. The hounds recruit the help of their Druid, Atticus O’Sullivan, and the Tasmanian police to track down the killer in the interest of a reward—but this time, they want more than food and justice.

Grist of Bees, by Delilah S. Dawson writing as Lila Bowen, follows Rhett Walker, who has given up his destiny as the monster-hunting Shadow to settle down with his beloved Sam. But when the call to action grows too strong, Rhett saddles up to follow a peculiar bee into the unforgiving desert. The bee leads him to a weeping mother in a strangely prosperous valley, and Rhett has no choice but to hunt the creature that’s stolen her child—even if it destroys a land of milk and honey.

Interlude: Tanager by Chuck Wendig returns us to the world of Miriam Black. Lauren “Wren” Martin is a young psychic woman who can see the stained souls of killers; it is her gift, or as she sees it, her curse. And up until now, it has been her mission to kill those killers, to remove them from the pattern so that they may not murder again. But now, after a death that may not have been deserved, she’s left rudderless, without plan or purpose, until a woman with a strange power of her own takes her in and gives her a new mission—and a new target.

First a canine whodunnit that may conjure a smile in the reader, second a thrilling performance of the skies with magic afoot and third a psychic hunter of acts of the macabre in great number.

The Buzz Kill by Kevin Hearne

Great Economy of words that move through fluidly with an entertaining fun read, the brevity due to the hound voice, one not of long discourse, which can be a good thing.
I loved Jack London’s canine tales.
This is a whodunnit with two hounds in the conversation.
A hound that can smell out blood is a good thing for detection of an unsub.
Oberon the Irish wolfhound and Starbuck the Boston Terrier and their human Atticus in search of devils, not the unseen kind, the Tasmanian kind, and maybe someone devilish as in murderer.
Bees have part to play in here too.
This trio new to me, memorable refreshing characters in storytelling, ones that have opened a whole new world of future reading and may do the same for other readers new to these characters.

Made my day with a smile, all evoked with narrative and voice of a hound with words like these, “I noticed when I looked back that Inspector Badgely was walking next to Atticus and both of them were smiling. Maybe it was a preliminary human mating ritual and maybe it was just talking, but proximity had to be good, I figured. Though I’m not very clear on that. Apparently, there are mating rituals now that involve texting and emojis. For some reason, egg- plants are significant. Humans are strange.”

A refreshing whodunnit, cheerful and mysterious with fluid storytelling, opened up for new reader of this author’s tale with trio a druid biologist man and two canines.

“Chasing butterflies is kind of like playing with a balloon, except you never know where they’re going to land. But they have a thing for flowers the way we hounds have a thing for asses. They can smell things other creatures can’t.”

Grist of Bees by  Lila Bowen

Kit Lawson aka Nettie Lonesome, Nat Hennessy, or Rhett Walker, with horse Puddin, two guns and Bowie knife, and bees, encountering mountains and magic afoot, did I mention he can fly and is… “murderous monster cowpoke with only one good eye and a body that was mostly scar tissue,” and fun too.

Known enemies are the “Cannibal Owl, Bernard Trevisan the necromancer, or El Rey.”

He has a promise to be upheld, one of the hunting kind involving monsters.
There are good monsters and bad monsters in the tale.
A tale of search and rescue and triumphing over evil.
Maybe today maybe another day but never dull day when Kit Lawson goes to play.

I am newcomer to this authors work, Lila Bowen, a pseudonym for Delilah S. Dawson, and characters and had no idea of the characters and their origins.
This would be great taster for reader being new to her writing.

I am a lover of birds, their majesty, their swiftness and grace, those grand beaks and dinosaur like claws, a melody in the sky and melody of a performance in this tale.

“Rhett had never been good with people, but he’d learned that if he treated a child like a jumpy colt, they could get along fine.”

“Once he was free of his human encumbrances, Rhett took a running start, leaped into the air, and felt the warm, familiar, golden string that seemed to run down his middle and turn him inside out. Soon, he had his own wings, his own bald head, his own sharp talons, his own cruelly hooked beak, and as the Lammergeier, he flapped after the harpy, screaming his fury at being denied his prey.”

The Angel of Death, a name they gave to both Wren and Miriam. Wren is in this tale, not Miriam, she wants to be not killing people, and inevitably finds herself with Lissa on the hunt for killers, the serial kind. A short interlude in reading with psychic goings on hunting down monsters that have two legs.

“Time passed, they worked, and death rode with them. Lissa was not interested in resting on their laurels, as she said, but in committing to the work tooth and nail, blood and bone, giving as much of themselves as they could. She had long been prepared, having curated a list of potential monsters that needed Wren’s special eye—Lissa knew the people on this list had powers, but what she did not know was if they had the shine. The liquid gleam of promised murder. Were they monsters? Would they be killers?”

Reviewed by Lou Pendergrast on 01 March 2019