Dead of Night: A Zombie Novel by Jonathan Maberry 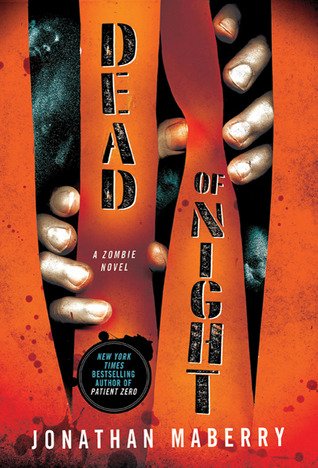 A prison doctor injects a condemned serial killer with a formula designed to keep his consciousness awake while his body rots in the grave.  But all drugs have unforeseen side-effects.  Before he could be buried, the killer wakes up.  Hungry.  Infected.  Contagious.  This is the way the world ends.  Not with a bang…but a bite.

A military bio-weapon could be the most dangerous weapon to us all.
Maberry takes you back through the turning process to where it all started with the first host.
Homer Gibbon was the states most notorious serial killer others watched and saw him be killed via lethal injection or did they?
There is death and then life again well kind of, the undead shall walk upon the earth and Jonathan Maberry is you tale conjurer. His dialogue, and sequences of events are all written spot on and carve out a zombie dilemma of sorts a literal version of the Walking Dead right from the first infection. All that makes good reading is here likable characters, element of surprise and the bad guys.

“Homer Gibbon was a legend at Rockview. A convict’s convict. They called him the Angel of Death. Some of them had Gibbon’s face tattooed on their arms.”

“This is a serum transfer pathogen,” he said in a ghostly voice. “It lives in any body fluid. Blood and sputum would be rife with newly hatched larvae. The logic inherent in parasites would cause the host to transfer the larvae through the most efficient possible means. Spitting into the eyes, nose, or mouth of a target host would work well. The parasites would be absorbed through the mucus membranes. But the most efficient and direct way to guarantee infection would be to forcibly introduce the parasites directly into the bloodstream.”

Reviewed by Lou Pendergrast on 03 March 2012