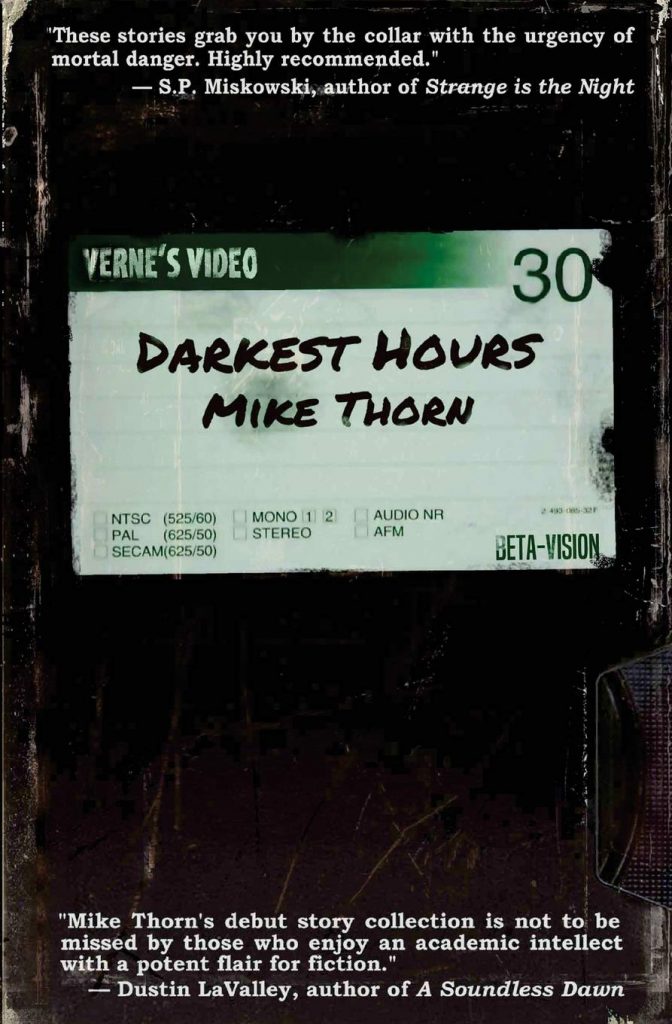 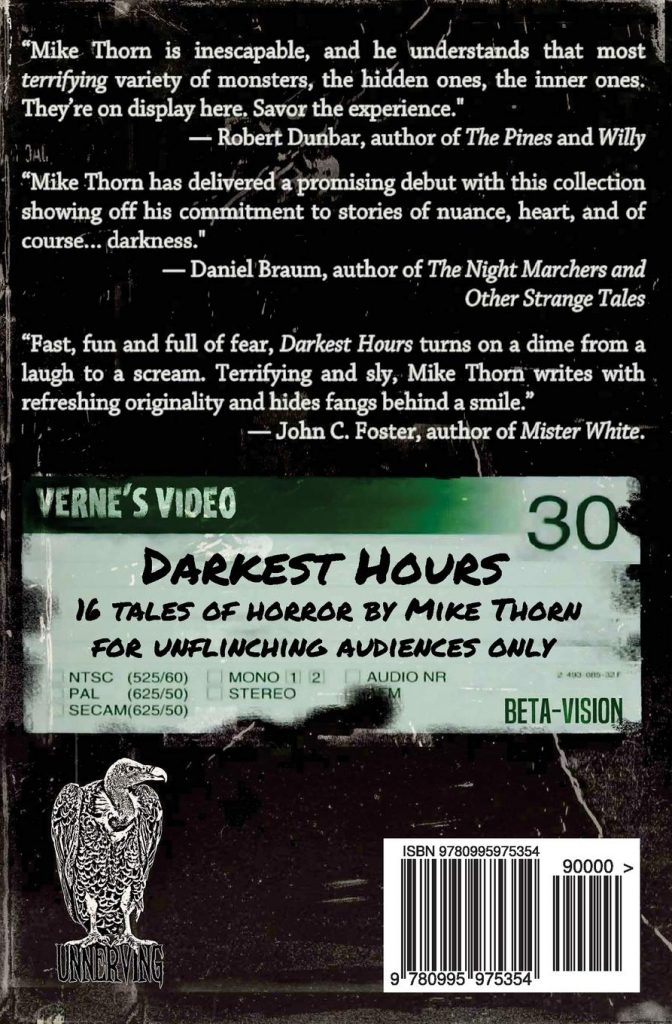 “In these sharply compelling stories Mike Thorn intertwines the bizarre and the quotidian to form seamless chronicles of personal disaster. The protagonist may not know the precise nature of the catastrophe heading his way, but you get the feeling he’s been anticipating something bad—and inexorable—for a long time. This rueful wisdom, a product of youthful disappointment and early trauma, informs each tale as it winds its way toward a natural yet surprising conclusion. The element of surprise is a tribute to Thorn’s ingenuity; the assuredness of his prose is due to his extensive knowledge of the horror genre. Perfectly paced from the first sentence, these stories grab you by the collar with the urgency of mortal danger. Highly recommended.”
— S.P. Miskowski, author of Strange is the Night

“Everyone has their own mythology. Most people, however, don’t recognize it as such. Mike Thorn gets it. His fiction seems to blur distinctions between horror and noir, between science fiction and fantasy. Between dream and reality. They’re all here. Demons. Monsters. Big ones, little ones. (Sometimes the things done to them are worse than the things they do.) When you first encounter Thorn’s writing, a number of qualities impress themselves: the macabre intelligence (brutal really), the chilling wit, the naturalness of the dialogue. Plus there’s the skill and style of the prose. It may all play out like a nightmare, but a terrible logic remains inherent. His characters make bad choices, and it’s those decisions that bring on calamity. At once, the reader recognizes this. Mike Thorn is inescapable, and he understands that most terrifying variety of monsters, the hidden ones, the inner ones. They’re on display here. Savor the experience.”
— Robert Dunbar, author of The Pines and Willy

Unwanted dread awaiting main character who was a seasoned horror fan that almost nothing scarred him anymore, till he had out of work hours meeting with work colleague in a kind of movie night date of an irreversible kind.
Horrification orchestrated with precision and effectiveness.

“This isn’t Freddy Krueger spitting jokes. This is no f*****g Boris Karloff in face-paint b******. This is the truth and you need to see it. You asked for it, man.”

“Someone killed another kitty”
And it wasn’t me, I love animals as so does Jarad.
One thing is for sure one “hellish epiphany” imminent for him.
Judging a book by its cover and all of that contained along with certain ways of policing and that good old life changing fright night.
Little fright goes a long way.

This is Jarad:
“Jarad looking inconveniently evil with his long hair, patchy beard, torn denim jacket, and death metal patches. For the past weeks, someone had been wandering the streets, brutalizing stray animals and house pets. The God-fearing cops had no doubt in their minds that these repeat killings were the crimes of requisite town weirdo, Jarad Cross. They’d watched the Geraldo Rivera special on the Satanic epidemic currently sweeping their Christian nation. They’d heard the chilling reports of daycare centers run by Lucifer-praising child molesters. They’d seen televised warnings about the bands and album covers that Jarad festooned across his jacket like demonic badges of pride.”

What’s the key to “Theodore’s proverbial heart?”
He shall divulge somewhat on this.

“Theodore understood his existence through only two comprehensible constants: life and death. Everything else, the chaos that came between the cradle and the grave, was unpredictable. What, then, could trump hair’s utter completeness? Hair was both dead and alive—some said that even after human beings bit the dust, their hair continued to sprout and extend. Others argued that this was an illusion, simply the result of flesh receding from a corpse’s skull: as the skin disintegrated, the roots of the hair exposed themselves, thus providing the deceptive image of extended length.
To Theodore’s mind, hair filled the tenebrous space between those two reliable poles, living and nonliving. Nothing set his body alight like discovering hair in unexpected places, nothing more thrilling than to consume the manifestation of existence’s paradox.”

Its horror night and teens with two boys and girls, Mary, Melody, Justin, and Sean, are in for a fright.

Green terror in a mans home with “a viridescent void.”

“On no other day, though, had he found himself standing gape-faced before his storage room, while his eyes reflected the neon greenness of a heaving blob.
Yes, there was a blob in his storage room.”

Charles has a friend of questionable character and wonders if he has a conscious. Two friends out late and Charles is worried about his mum getting upset over his smoking and amongst other things wondering with Dex. There is trouble ahead.

A group friends terrified from this Nighttime visitations from the Long Man.

“They talked calmly to me about nightmares and the power of imagination, and they told me that monsters weren’t real, that monsters would go away if I just didn’t believe in them.”

It could have been a lovely excursion, a little break in a cabin, a sabbatical and dissertation awaiting on the bank page, writers block cure awaits, but it turns out to be a horrific kind of break.

“Gage thought about the stack of Ligotti, Bataille, Zappfe, and Kristeva waiting like a stack of omens in the trunk of the car.”

“He pried himself from the wall and shook his head. What was his problem? Maybe he was the one with the issues—he was, after all, the guy who studied disturbingly nihilistic philosophy with such devotion.
Ligotti goes in, paranoia comes out.”

A dilemma of a certain state of existence and a paradox as he says in here, “the world is mine, but I have nothing.”

“This is the recollection that spins continuously and obsessively through my literally brainless mind. Not brainless as in stupid, but brainless as in a physical absence of cerebral lobes, all the mysteries of consciousness unchained from cortex containment. The loss of the body is a vexed and complex gift—or curse—of death, but the persistence of mind haunts me while I’m haunting you, haunting him, haunting her, haunting them. Haunting, haunting, haunting, and good God, I don’t know why this trauma belongs to me.”

“Sure, occasionally I think that I can almost conceptualize my own state of being, that I can maybe put my education’s theoretical abstractions into this reality. But every time I think I might have reached a kind of peace, bolstered by the theories of some post-structuralist or mystic thinker, I’m locked with terror.”

Mike Thorn is the author of the short story collection Darkest Hours. His debut novel Shelter for the Damned will be released through JournalStone on February 26.

His fiction has appeared in numerous magazines, anthologies and podcasts. 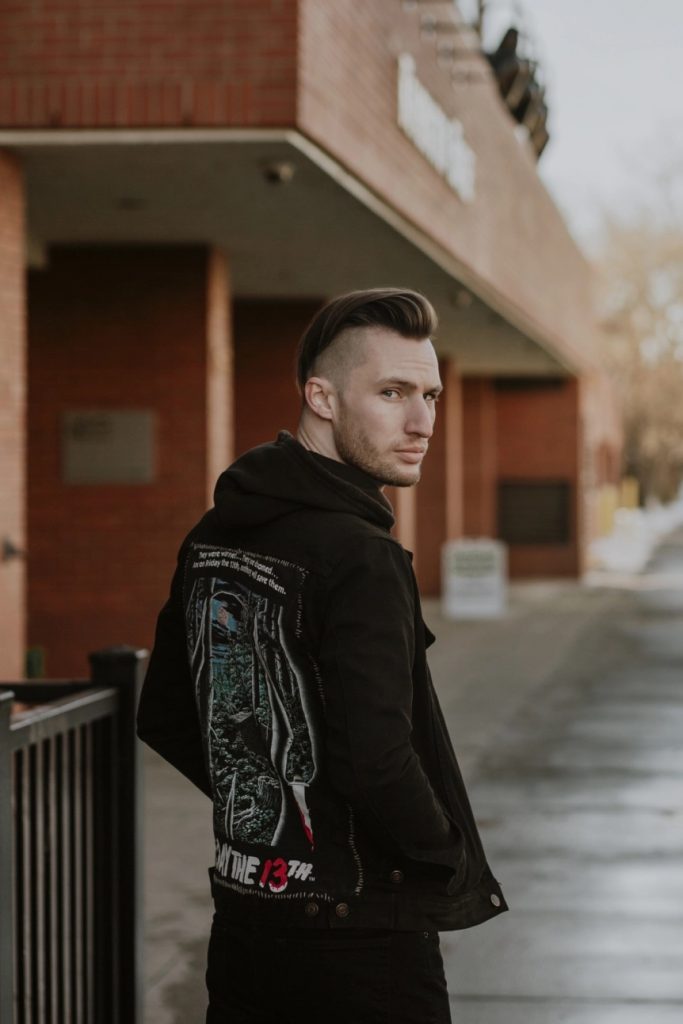 Reviewed by Lou Pendergrast on 17 February 2021