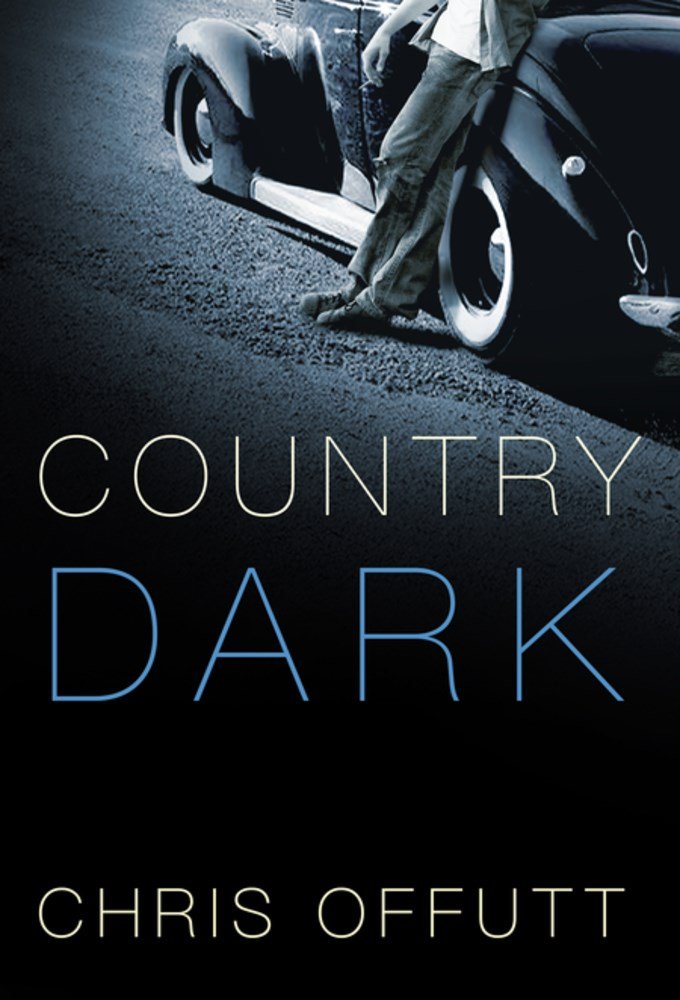 Chris Offutt’s long-awaited return to fiction after nearly two decades, Country Dark is a fierce noir-inflected novel about a good man pushed by circumstance into crime.

Chris Offutt is an outstanding literary talent, whose work has been called “lean and brilliant” (New York Times Book Review) and compared by reviewers to Tobias Wolff, Ernest Hemingway, and Raymond Carver. He’s been awarded the Whiting Writers Award for Fiction/Nonfiction and the American Academy of Arts and Letters Fiction Award, among numerous other honors. His first work of fiction in nearly two decades, Country Dark is a taut, compelling novel set in rural Kentucky from the Korean War to 1970.

Tucker, a young veteran, returns from war to work for a bootlegger. He falls in love and starts a family, and while the Tuckers don’t have much, they have the love of their home and each other. But when his family is threatened, Tucker is pushed into violence, which changes everything. The story of people living off the land and by their wits in a backwoods Kentucky world of shine-runners and laborers whose social codes are every bit as nuanced as the British aristocracy, Country Dark is a novel that blends the best of Larry Brown and James M. Cain, with a noose tightening evermore around a man who just wants to protect those he loves. It reintroduces the vital and absolutely distinct voice of Chris Offutt, a voice we’ve been missing for years.

“Chris Offutt has crafted a whole new kind of book—steeped in elements of noir and rich cinematic devices—brimming with characters that are simultaneously realistic while also mythical in the best, bigger-than-real-life kind of way. Country Dark is a perfect balance of wonderful language and pulsing action. I couldn’t put it down.”
— Silas House, author of Eli the Good and Clay’s Quilt

“Chris Offutt is back, writing with his gritty, poetic language about mid-century eastern Kentucky. Country Dark reveals the core of one man’s humanity as he risks everything, including his life, to hold his family together. Offutt is a born storyteller. He draws us in from the first page and never lets us go.”
— Ron Rash, author of Above the Waterfall and Serena

“Chris Offutt’s work about mountain life earns high praise from other writers, and Country Dark, his return to fiction, is entirely welcome and a pleasure all around.…Offutt writes so well, with such deep knowledge of the language and people, that Country Dark is likely to be read straight through, no resting places.”
— Daniel Woodrell, author of Winter’s Bone and The Maid’s Version

“Like the late, great Larry Brown and the late, great William Gay, Chris Offutt delivers a hardscrabble, mythic South with a laconic voice that turns sly to describe the follies of Man…Country Dark is a smart, rich country noir.”
— Stewart O’Nan, author of City of Secrets

“A lean, mean meditation on family, boundaries, and what a good man will do to protect the ones he loves. In this blood-and whiskey-soaked landscape, I’m reminded of both Faulkner and Steve Earle. A morality tale where grit and heart hold equal weight.”
— Ace Atkins, New York Times bestselling author of The Fallen and the forthcoming The Sinners

“I’ve waited nearly twenty years for another novel by Chris Offutt, and boy is Country Dark worth it! From its excellent title to its last page, this one will pull you in and immerse you in the lives of its myriad characters…Offutt is a terrific writer with impressive range.”
— Thomas Franklin, author of Crooked Letter, Crooked Letter

“Country Dark is grim and funny and touching. It’s a crime story, a novel of backwoods manners, and a family saga. It’s many things at once, all of them great. Masterful descriptions of the natural world bump up against scenes of shocking violence, and you’re left in awe, wondering how the hell Chris Offutt managed to pull this book off.”
—Richard Lange, author of The Smack, Angel Baby, and Dead Boys

“A Southern gothic story . . . Offutt has a fine ear for Kentucky-speak . . . that capture[s] the rhythms of rural conversation . . . Tucker is a knotty and complex character . . . A compelling and brooding read.”
— Kirkus Reviews

“It’s been nearly 20 years since Offutt’s Out of the Woods (1999), and his return to fiction will be celebrated by all readers of country noir . . . Tucker is a true existential hero, facing his circumscribed world directly and acting with unflinching determination. His story, like the work of Daniel Woodrell, is both heartrendingly painful and unsentimentally uplifting.”
— Booklist

“Offutt’s exceptional new novel (following his memoir My Father, the Pornographer) brings to light with gritty, heartfelt precision what one character, a social worker, calls the ‘two Kentuckys, east and west, dirt and blacktop.’ . . . Offutt’s prose cuts deep and sharp . . . An undeniable testament to the importance and clarity of Offutt’s voice in contemporary American literature”
— Publishers Weekly

Tucker would avoid certain types of peoples, he was a straight up man, courageous and loyal, brave southerner from Kentucky, his intuition guided through depths of chaos, too smart to be hoodwinked, and an unprejudiced man to boot.

The narrative opens with Tucker back home from War, Korea, and on his way to Kentucky and near the close of the tale another war broken out in Vietnam, one he had no part in but troubles of his own at home.

He starts of lonesome and then finds love and family.

His finds himself in some troubles with family and young ones in the balance, with his home under siege in ways from authorities and other threats attached with the trade he took up upon himself to partake in to feed his growing family.

War had him skilled with taking out his enemy and as they show themselves in this narrative he had a Ka-bar, of which he is fond of, to hand.

Faulkner wrote of Tragedy in Yoknapatawpha county (a fictional county in Mississippi), John Steinbeck of California, Daniel Woodrell of Missouri Ozarks, Ron Rash of Appalachian Mountains of North Carolina and many more of certain counties and denizens of them, and now Chris Offutt has Kentucky territory to his name with this work and other short stories of past.

Some similes have you break a smile like this one, “The boy was crazy as a rat in a coffee can,” and “slid through his bowels like Sherman through Georgia.”

Southern gothic noir at its best, in the strain of all those good storytellers that past like William Gay, Harry Crews, Faulkner, and ones still producing works like Woodrell,  Cormac McCarthy, Ron Rash, Joe Lansdale and James Lee Burke.

“Tucker stood in Ohio and looked across the river at the swollen green land of Kentucky. He’d left in early summer and returned in spring, a winter of war in between. He began crossing the bridge. Wind made it sway and he grabbed a strut. Briefly he recalled seeing a dozen dead enemy strewn about a dynamited bridge near the front, a boundary that changed week to week. If Ohio attacked Kentucky, one bunch or the other would blow this bridge to smithereens. Anyone who fought wouldn’t know the difference between soldiers, the same as North and South Koreans. It was Truman’s war, not Tucker’s, but he’d killed and nearly been killed and watched men tremble with fear and cry like kids. His army pay of four hundred forty dollars was folded tight and distributed about his body in every pocket. The eleven medals he received were at the bottom of his rucksack.”

“Tucker had missed the sheer expanse of sky at night, the tiny cluster of seven sisters, Orion’s sword, and the drinking gourd that aimed north. The moon was a gibbous, barely there, as if chewed away. The sky stretched black in every direction. Clouds blocked the stars, lending an unfathomable depth to the air. The tree line was gone and hilltops blended with the black tapestry of night. It was country dark. He closed his eyes, feeling safe.”

From my interview with the author:

This novel Country Dark, how is it like to send this baby out into the world?

It felt great. In the past 15 years I’d written two other novels hadn’t worked out.  This one kind of took off on me.  I gave over the process and followed Tucker through some interesting times in his life.  Finally writing a book that satisfied me was a terrific realization.

This Country Dark, what is the origins of the story and the characters upon the page? On writing, tell me of your habits, the tools, place, time and music?

My original idea was to write a big novel of three-generations in the hills.  It made sense to start with the grandfather—Tucker—but I became so taken by him that I never got past 1971.

I write long hand sometimes and transcribe.  Mostly I compose at the keyboard.  I write in a room in my house.  At long last I finally have my own quiet studio.  In the past it was a garage, a basement, an attic, a garden shed or a partitioned-off part of a living room.

No music ever. I prefer the utter silence.  My current writing room has musician-grade baffling in the walls to block exterior sound.  I prefer to work in a room with no lights on.  Both the quiet and the dimness make it easier for me to focus exclusively on narrative, character, dialogue and the quality of prose.

Read the rest of the interview @ https://more2read.com/review/interview-with-chris-offutt/

Reviewed by Lou Pendergrast on 09 April 2018