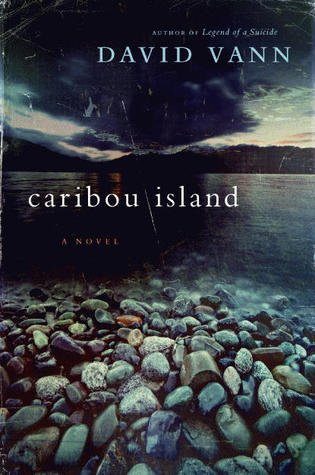 The prize-winning author of Legend of a Suicide delivers his highly anticipated debut novel.

On a small island in a glacier-fed lake on Alaska’s Kenai Peninsula, a marriage is unraveling. Gary, driven by thirty years of diverted plans, and Irene, haunted by a tragedy in her past, are trying to rebuild their life together. Following the outline of Gary’s old dream, they’re hauling logs to Caribou Island in good weather and in terrible storms, in sickness and in health, to build the kind of cabin that drew them to Alaska in the first place.

But this island is not right for Irene. They are building without plans or advice, and when winter comes early, the overwhelming isolation of the prehistoric wilderness threatens their bond to the core. Caught in the emotional maelstrom is their adult daughter, Rhoda, who is wrestling with the hopes and disappointments of her own life. Devoted to her parents, she watches helplessly as they drift further apart.

Brilliantly drawn and fiercely honest, Caribou Island captures the drama and pathos of a husband and wife whose bitter love, failed dreams, and tragic past push them to the edge of destruction. A portrait of desolation, violence, and the darkness of the soul, it is an explosive and unforgettable novel from a writer of limitless possibility.

While reading this story i am thinking of the story Revolutionary Road written by Richard Yates a tale of marriage and the destructive behaviors of the human heart displayed in that story. If you have seen the movie it is probably even more engrained in your mind the images of despair and the path the couple found themselves down. The pursuit of happiness its funny how we try to attain happiness. I recently watched Shadowlands a movie with Anthony Hopkins playing the role of the great writer C. S. Lewis taken from his real life account. He unexpectedly experiences love in the very last stages of the two and fro of a friendship he did not understand love before only until certain situations came about did he understand his path. That movie gave an example of a person caught in the pursuit of goals of splendor in academic and religious constrains away from more palpable feelings and rewards of love and companionship.

In this story, Caribou Island, the characters are faced with many obstacles and challenges of trust, lust or illness. The accommodation of the characters of this story on a beautiful and wonderfully described Alaskan island Caribou island brings about a chance and opportunity to test the waters of these characters’ trust and love. They eventually experience a wake up call of sorts.

Illness and despair, when the clock is ticking and that sand in the hour glass runs on its last bead of sand we have a whole different outlook towards those around us.
Calamities can bring about change for the betterment of the parties involved.
In this story there a people who are either in love, want love, think they have love and possibly trust the untrustworthy.

It’s seems the fate of one parent and the legacy she left behind has tainted the family and has cast upon them melancholy and a dark over hanging shadow like a black cloud that follows your footprints determined to pour on you cold rains that somehow magically wash away traits of hope.
This Alaskan environment proves to be a form of paralysis to some individuals and brings to fruition love and despair and is all acted out in this story of tragedy.

David Vann has successfully brought to the table a captivating, deep felt, meaningful human tragedy in a prose with wonderful descriptions of landscape coupled with memorable and heartfelt characters.

“My mother was not real. She was an early dream, a hope. She was a place. Snowy, like here, and cold. A wooden house on a hill above a river. An overcast day, the old white paint of the buildings made brighter somehow by the trapped light, and I was coming home from school. Ten years old, walking by myself, walking through dirty patches of snow in the yard, walking up to the narrow porch. I can’t remember how my thoughts went then, can’t remember who I was or what I felt like. All of that is gone, erased.”

“Above all else, Gary was an impatient man: impatient with the larger shape of his life, with who he was and what he’d done and become, impatient with his wife and children, and then, of course, impatient with all the little things, any action not done correctly, any moment of weather that was uncooperative. A general and abiding impatience she had lived in for over thirty years, an element she had breathed.”

“Gary was a champion at regret. Every day there was something, and this was perhaps what Irene liked least. Their entire lives second-guessed. The regret a living thing, a pool inside him.”

“To Monique, the best part about this place was the scenery: the high, lush mountains close along either side of the river, the short valleys dotted with wildflowers, the swampy areas dense with skunk cabbage, ferns, mosquitoes, and moose.”

“A world that shouldn’t exist, far away and untouchable. You could bring a crab up, but you couldn’t go down to them, couldn’t join. And this was the truth about Monique. He could have her for a short time, and his money could make it seem almost that he could fit into her world, but she was untouchable.”

“He didn’t understand marriage. The gradual denial of all one desired, the early death of self and possibility. The closing of a life prematurely. But this wasn’t true, he knew. It was only the way it seemed right now, during a bad time. Once Irene got better and returned to her old self, he’d feel differently.”

“The lives of plants like humans, full of struggle and domination, loss and dreams that never happened or happened only briefly. And that was the worst, to have something and then not have it, that was certainly the worst by far.”

Check out my interview with him in August 2012>>>https://more2read.com/review/interview-with-david-vann/

Reviewed by Lou Pendergrast on 03 August 2012