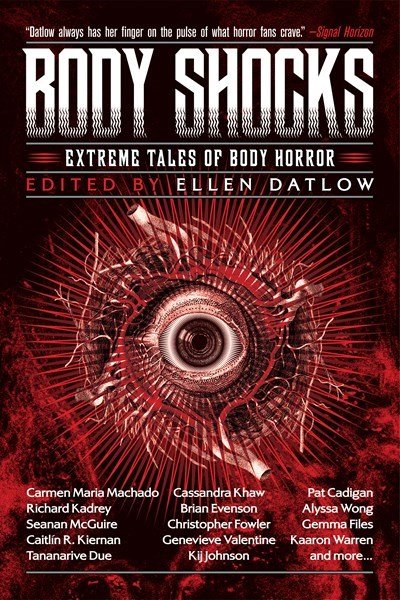 In these 29 tales of body horror selected by World Horror Grandmaster Ellen Datlow, you’ll find the unthinkable, the shocking, and more: a couture designer preparing for an exquisitely grotesque runway show; a vengeful son seeking the parent who bred him as plasma donor; a celebrity-kink brothel that inflicts plastic surgery on sex workers; and organ-harvesting doctors who dissect a living man without anesthetic.

The Travellers Stay by Ray Cluley

You Go Where It Takes You by Nathan Ballingrud

A Positive by Kaaron Warren

It Was the Heat by Pat Cadigan

The Transfer by Edward Bryant

Welcome to Mengele’s by Simon Bestwick

The Truth That Lies Under Skin and Meat by Cassandra Khaw

The Lake by Tananarive Due

The Look by Christopher Fowler

The Old Women Who Were Skinned by Carmen Maria Machado

Elegy For a Suicide by Caitlín R. Kiernan

A True Friend by Brian Evenson

What I Found in the Shed by Tom Johnstone