Bearskin by James A. McLaughlin 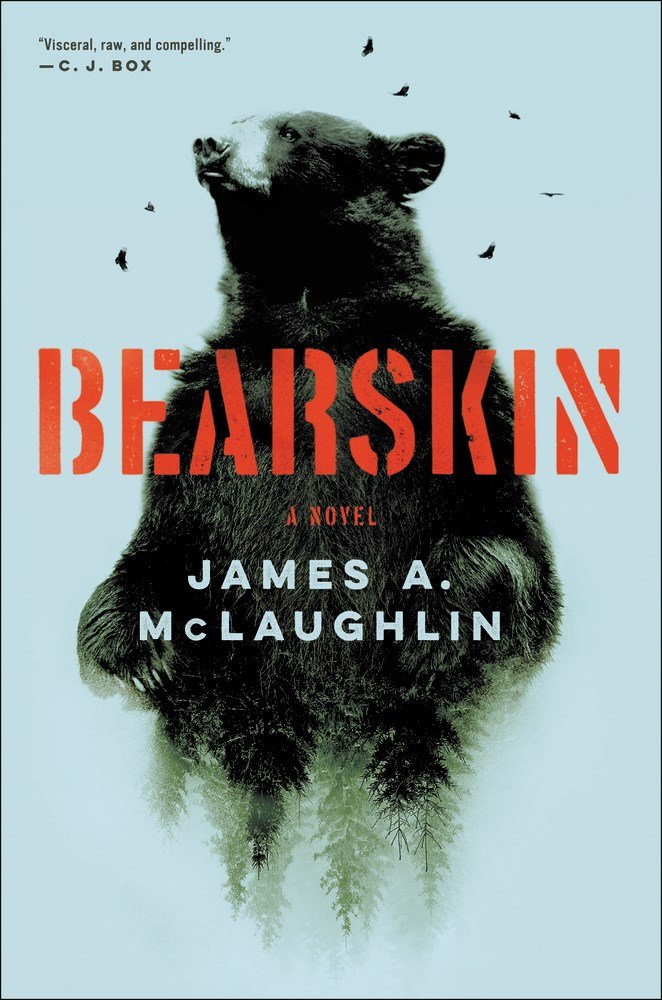 A gritty and captivating debut about a caretaker of an Appalachian nature preserve who gets embroiled in a dangerous bear-poaching scheme—for fans of Smith Henderson, Ron Rash, and Daniel Woodrell

Rice Moore is just beginning to think his troubles are behind him. He’s found a job protecting a remote forest preserve in Virginian Appalachia where his main responsibilities include tracking wildlife and refurbishing cabins. It’s hard work, and totally solitary—perfect to hide away from the Mexican drug cartels he betrayed back in Arizona. But when Rice finds the carcass of a bear killed on the grounds, the quiet solitude he’s so desperately sought is suddenly at risk.

More bears are killed on the preserve and Rice’s obsession with catching the poachers escalates, leading to hostile altercations with the locals and attention from both the law and Rice’s employers. Partnering with his predecessor, a scientist who hopes to continue her research on the preserve, Rice puts into motion a plan that could expose the poachers but risks revealing his own whereabouts to the dangerous people he was running from in the first place.

James McLaughlin expertly brings the beauty and danger of Appalachia to life. The result is an elemental, slow burn of a novel—one that will haunt you long after you turn the final page.

“One of the year’s most buzzy, fascinating thrillers. . . . A suspenseful, emotionally resonant journey into one man’s dark past.”
– Entertainment Weekly

“A journey into the wilds of Appalachia. . . . Tightly plotted and beautifully written, Bearskin marks an auspicious debut.” – Nylon Magazine

“Bearskin—a gripping tale written in spare, beautiful prose—tells the tale of Rice Moore, a reluctant hero, competent, resilient, and utterly engaging. McLaughlin is a gifted storyteller, and Bearskin is a remarkable debut.” – Scott Smith, NYT Bestselling author of A Simple Plan and The Ruins

“Bearskin is visceral, raw, and compelling—filled with sights, smells, and sounds truly observed. It’s a powerful debut and an absolute showcase of exceptional prose. There are very few first novels when I feel compelled to circle brilliant passages, but James McLaughlin’s writing had me doing just that.” – C.J. Box, #1 NYT bestselling author of The Disappeared

“A secret past, old foes, bloodthirsty locals, and the destruction of the natural world converge in McLaughlin’s debut novel. An intricately written thriller that explores the darkest parts of human nature against the beauty of unspoiled American wilds.” – Ace Atkins, New York Times bestselling author of Robert B. Parker’s Old Black Magic and The Sinners

There is a need for preservation, for self, for forest preserve, and for Bear. This narrative is tight and without wavering, on point, right in the story, having the reader in the scene and developments in hunt of the bear killer, suited in a a ghillie suite. A good mystery in Appalachian wilderness, a bad men hot on a mans trail kind of redemption tale. Pair this up with No Country For Old Men by Cormac McCarthy and recent debut of Rough Animals by Rae DelBianco.

“He’d been warned when he took the job, but the occasional flash of local hostility still surprised him. As the caretaker of the Turk Mountain Preserve, he represented wealthy outsiders and a preservation ethic that seemed nonsensical and elitist to the locals.”

“He waited, but they didn’t come. He watched the bait station, climbing the tree the poachers had used, skulking there against the trunk as the light failed and the bait station transformed into something more sinister, remnants of a savage ritual gone haywire: tattered bear carcasses, a log cage haphazardly built for some unspeakable purpose, the ghastly cow’s head witched into the air, keeping its vigil. Other nights he stalked along the ridges, listening for voices, engines, footfalls, but hearing only the insects’ waning symphony, three species of owl, hoarse barking of foxes, a pack of big eastern coyotes that howled like wolves, and once, a bobcat scream so desperate and feral it made his eyes water. The crescent moon thickened to a bright oblong eye that fell behind Serrett Mountain a few minutes later each evening. Rice found he could make his way around the preserve even in scant starlight, and he always knew where he was, placed precisely on a three-dimensional map in his head. He wondered about this. The months he’d spent typing a century of logbook data into Sara’s spreadsheets, obsessively locating every observation on the maps, must have built a kind of synthetic memory in his subconscious, a bone-deep knowledge of the preserve, as if he’d lived there for generations.”