The Battle for Room 314 by Ed Boland

The Battle for Room 314 by Ed Boland 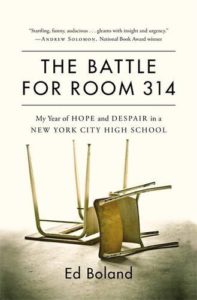 In a fit of idealism, Ed Boland left a twenty-year career as a non-profit executive to teach in a tough New York City public high school. But his hopes quickly collided headlong with the appalling reality of his students’ lives and a hobbled education system unable to help them: Freddy runs a drug ring for his incarcerated brother; Nee-cole is homeschooled on the subway by her brilliant homeless mother; and Byron’s Ivy League dream is dashed because he is undocumented.

In the end, Boland isn’t hoisted on his students’ shoulders and no one passes AP anything. This is no urban fairy tale of at-risk kids saved by a Hollywood hero, but a searing indictment of schools that claim to be progressive but still fail their students. Told with compassion, humor, and a keen eye, Boland’s story is sure to ignite debate about the future of American education and attempts to reform it.

“[Boland] never paints himself a hero, rather shares his failings generously when his own education and passion leave him short on immediate solutions. Boland seamlessly ushers readers into his stressful world and keeps them there. Readers will ache for him when students turn in blank worksheets, laugh when he tries to control his classroom using phrases he imagines ‘a real teacher would say,’ and furiously turn the pages to find out what the next school day holds. While there are few victories, readers are not left hopeless. Some students succeed, and Boland concludes the book with his case for changes needed in America’s educational system. With skillful storytelling, self-deprecating humor and swiftly paced narratives, Boland’s vulnerability will lure readers from the first scene.” Associated Press

“By turns harrowing and hilarious, Ed Boland’s memoir about teaching in a New York City high school is raw, moving, and smashes the dangerous myth of the hero-teacher. The story told in The Battle for Room 314 shows us how high the stakes are for our most vulnerable students. It offers a fresh view and a pointed and powerful first-person perspective on American public education.” Piper Kerman, author of Orange is the New Black: My Year in a Women’s Prison

“Enthralling…By turns hilarious and heartbreaking, Boland’s memoir is a deeply human story about the power of teaching.” Publishers Weekly

“Boland has a knack for capturing the stakes in seemingly small moments and the intensity of clashes between personalities. Ruthless in his evaluation of himself, his students, and the larger educational system, Boland provides a clear look at the challenges facing public schools today.” Booklist

“Captivating, insightful, and instructive…Boland’s colorful descriptions let the reader share his experience, living his successes, his growing understanding of his craft and his students, his dissections of days that did not go well, and his efforts to maintain hope.” Library Journal

“Riveting… There’s nothing dry or academic here. It’s tragedy and farce, an economic and societal indictment of a system that seems broken beyond repair.” NY Post

“The Battle for Room 314 is a personal account of Ed Boland’s jarring foray into the high school classroom from the world of fundraising. With humor, insight, and grim persistence, Boland grapples with the realities of his students’ lives as they all face the enduring issue of poverty. This memoir is a humbling reminder that no teacher is an island, and that schools, systems, and communities all share a responsibility to ensure that every child has access to a quality education.” James E. Ryan, Dean, Harvard Graduate School of Education

“In a sea of books in which the conquering hero arrives at an inner city school and magically transforms it, Ed Boland’s The Battle for Room 314 is a breath of fresh air. Finally, a book that presents not the panacea but the reality of making schools work in communities where students face the triple challenge of poverty, racism, and violence.” Luis Ubinas, former president, the Ford Foundation

“From laughter to heartbreak, Ed Boland’s The Battle for Room 314 is a searing indictment of the current state of urban public schooling. With humor, sensitivity, and sophistication, Boland challenges us to acknowledge and reform our country’s starkly bifurcated educational system-and the racial and socioeconomic power structures that back it. Deserving of a place alongside Jonathan Kozol’s classic Death At An Early Age, Boland’s memoir is an absolute must-read for educators, politicians, and activists.” Dan-el Padilla, author of Undocumented: A Dominican Boy’s Odyssey from a Homeless Shelter to the Ivy League

One mans journey to make a difference, to be down in the trenches, toe to toe, and guide students to a better hope, a better dream, through education.
Teaching in a school that almost kids have been left behind, forgotten, given up on.
He persists to try to breakthrough the levels of dialogue and try to break into the many character shells the inner city students have put up, trying to instilling love for learning.
Inspiring tale of the battle of the school room, every student described in a way that the reader has a great sense of their turbulent lives in the street and at home, the hearts at conflict with themselves, ones of today.
The future, the next generation, something so important, and an eye into how things are failing and how students are falling into the cracks from their home battles, to battle within the schools with race and gender equality.
Written in very readable and easy layered out sentences, non-fiction reading like fiction with very real characters, memorable in the readers mind, a joy to read.

Reviewed by Lou Pendergrast on 15 April 2016