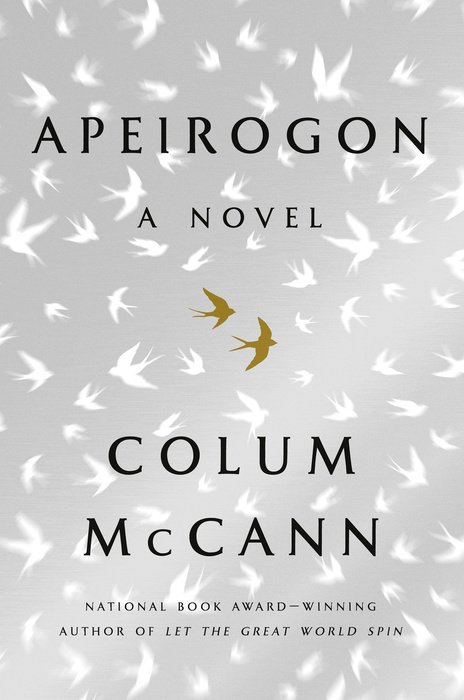 From the National Book Award–winning and bestselling author of Let the Great World Spin comes an epic novel rooted in the real-life friendship between two men united by loss.

Colum McCann’s most ambitious work to date, Apeirogon—named for a shape with a countably infinite number of sides—is a tour de force concerning friendship, love, loss, and belonging.

Bassam Aramin is Palestinian. Rami Elhanan is Israeli. They inhabit a world of conflict that colors every aspect of their daily lives, from the roads they are allowed to drive on, to the schools their daughters, Abir and Smadar, each attend, to the checkpoints, both physical and emotional, they must negotiate.

Their worlds shift irreparably after ten-year-old Abir is killed by a rubber bullet and thirteen-year-old Smadar becomes the victim of suicide bombers. When Bassam and Rami learn of each other’s stories, they recognize the loss that connects them and they attempt to use their grief as a weapon for peace.

McCann crafts Apeirogon out of a universe of fictional and nonfictional material. He crosses centuries and continents, stitching together time, art, history, nature, and politics in a tale both heartbreaking and hopeful. Musical, cinematic, muscular, delicate, and soaring, Apeirogon is a novel for our time.

“Every significant novel is an act of reckless originality. Colum McCann’s Apeirogon is nothing like any book you’ve ever read. Think of reading David Mitchell’s Cloud Atlas, Anne Carson’s Autobiography of Red, or George Saunders’s Lincoln in the Bardo for the first time. Think of discovering an entirely unprecedented, and profoundly true, narrative form. Think about feeling that the very idea of the novel, of what it can be and what it’s capable of containing, has been expanded, forever.”
—Michael Cunningham, New York Times bestselling author of The Snow Queen

“A quite extraordinary novel . . . Colum McCann has found the form and voice to tell the most complex of stories, with an unexpected friendship between two men at its powerfully beating heart.”
—Kamila Shamsie, author of Home Fire

“Apeirogon is a brilliant dramatization of the tensions behind a universal problem, the contentious ownership of land and the location and nature of its borders. This novel arrives at a crucial time for us in the history of the world.”
—Barry Lopez, National Book Award–winning author of Outside

“Colum McCann loves a high-wire act, and Apeirogon is a powerful, political tightrope walk of a novel. It’s the story of modern Israel and the story of modern Palestine. This beautiful, deeply felt book is first and foremost an extraordinary act of listening.”
—Nathan Englander, PEN/Malamud Award–winning author of Dinner at the Center of the Earth

“Distinguished by empathy and intelligence, this transformative novel marks a new threshold of writing about the conflict. Colum McCann manages to take it all in without prejudice and with profound feeling for the suffering of all sides. Apeirogon will have a potent effect on all those who read it and, remarkably, could lead to great consequences for the future of this place.”
—Raja Shehadeh, author of Palestinian Walks

“A work of incredible magnitude . . . McCann finds the emotional accuracy, the sensitivity, and the beauty to tell the heartbreaking reality of life in Israel-Palestine, while allowing readers a glimmer of necessary hope. Apeirogon is greater than a novel in more than one sense, and will both touch and enrich readers, wherever they live and whatever they know about the region.”
—Assaf Gavron, author of The Hilltop

“A soaring, ambitious triumph . . . deeply nuanced and sensitive . . . a remarkable achievement . . . McCann’s latest novel might be his finest yet.”
—Kirkus Reviews (starred review) 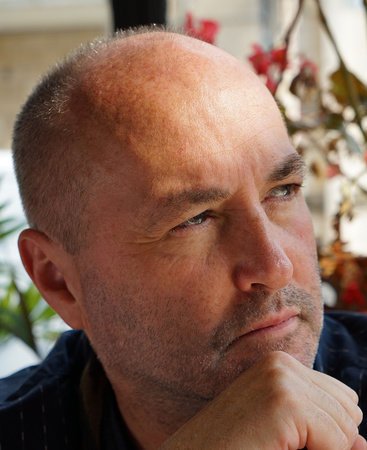 Colum McCann is the internationally bestselling author of the novels TransAtlantic, Let the Great World Spin, Zoli, Dancer, This Side of Brightness, and Songdogs, as well as three critically acclaimed story collections. His fiction has been published in thirty-five languages. He has received many honors, including the National Book Award, the International IMPAC Dublin Literary Award, a Chevalier des Arts et des Lettres award from the French government, and the Ireland Fund of Monaco Literary Award in Memory of Princess Grace. He has been named one of Esquire’s “Best and Brightest,” and his short film Everything in This Country Must was nominated for an Oscar in 2005. A contributor to The New Yorker, The New York Times Magazine, The Atlantic, and The Paris Review, he teaches in the Hunter College MFA Creative Writing program. He lives in New York City with his wife and their three children, and he is the cofounder of the global nonprofit story exchange organization Narrative 4.