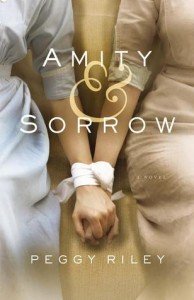 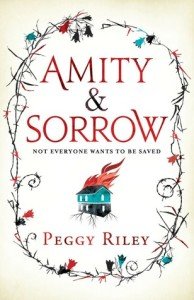 A mother and her daughters drive for days without sleep until they crash their car in rural Oklahoma. The mother, Amaranth, is desperate to get away from someone she’s convinced will follow them wherever they go–her husband. The girls, Amity and Sorrow, can’t imagine what the world holds outside their father’s polygamous compound. Rescue comes in the unlikely form of Bradley, a farmer grieving the loss of his wife. At first unwelcoming to these strange, prayerful women, Bradley’s abiding tolerance gets the best of him, and they become a new kind of family. An unforgettable story of belief and redemption, AMITY & SORROW is about the influence of community and learning to stand on your own.

The devout and the devilish, they take centre stage in this tale, which characters fit that description would not be hard to surmise once completing this story.
Amity and Sorrow two sisters born into a family that consists of many mothers and one father. This was a really engrossing tale, the narrative has you really in the tale, with the right words usage and just the right sentencing, the author will have you captivated in the uncovering of the bizarre world that the two girls were raised in and now on the run due to their mothers decline of faith in a self professed chosen one, a father, a husband , a man with fifty five wives and twenty seven children.
The mother, Amaranth, was the first wife and she soon sees that she has been controlled and brain washed into her husbands world view. Their are many shocking and tragic things to learn of in their days of before when they were all living under one roof under his control. A mothers concern for one daughter in particular, Sorrow, is the real reason for her fleeing as she learned that the home was not that quite working as she learned and her daughter was in more danger than she knew.
You heart goes out to these children trapped and unaware of knowledge being played against them in their naïveté, you will want to follow them to the end. Can she convince her daughters of the sin that their father represents or will she loose them to him out of their love for the chosen one?
There are some humorous moments in the story, for example due the two girls finding themselves for the first time amongst civilization they know not of tv and books and in this story their is one scene where Amity is advised on a book to read, read her reaction to this in this excerpt,

“You ever heard of a Mr. John Steinbeck?” the devil says.
“No, sir.”
“Dumb and ignorant to boot. This ain’t no Bible. This here book is The Grapes of Wrath. You heard of that?”
“Not exactly.”
“Either you has or you hasn’t”
“God the Father says that anyone worshiping the beast will receive a mark on her forehead and drink the wine of God’s wrath and that must be pressed from His grapes of wrath, sir.”
“Well,” says the devil. “Maybe you ain’t entirely dumb. Just mostly. You all are dumb for God, ain’t you?”
Amity nods. She supposes they must be. She could hardly hope to keep a thing like that from the devil.”

There are times when this novel takes me back, into remembering that great story Wise Blood by Flannery O’Connor.
This story was written with a great fluid prose style that fits the whole pace and events, an excellent debut that made me feel part of the drama in the characters shoes.
One story and many memorable characters to remain in ones heart and mind for many a day.

“When they reach the house, the three females fear it. Not for the look of the place, a gap-toothed, rough-hewn, clapboard two-story, painted white a long, long time ago. Not for the four windows, up and down, dark and empty as sockets. Not for the porch that sags beneath it or the old, scabby tree that grows to the side of it, branches arching over to smother the roof. They would fear any house. When the man pulls open a screen door it groans on its hinges. When he pushes in the front door, so that all of them can see inside the dark mouth of his house, they shiver. They are forbidden to go in. It is a rule.”

“All great journeys are made in faith. The pilgrim over dark seas, the immigrant to new lands, the pioneer to a salt-baked lake. Faith calls the native to the spirit walk, the vision quest, but Amaranth can only hope, in retrospect, that hers is a great journey.
Six days since she left her husband, nearly one week since she ran, and she cannot help but feel that God Himself has crashed her here. He certainly seems less than keen on showing her a way out, as if He is holding her until her husband can catch up.”

“The woman withdraws it, sticky, and leans down to her. “You need something, sweetie?”
“The house of the Grapes of Wrath” she says. And when the lady tries to leave, she sings out, “Library! Library!” remembering the old man’s name for it.
When she gets to the door, she knows it is the best of temples—dark and lit by small windows, where motes spin in shafts of light like tiny angels and the quiet hush of pages turning, soft as cloth on boards. A woman stands at its center instead of an oracle, with long purple hair and a silver star on her chest.
Amity walks to her and speaks in her bravest voice, loud and clear. “I have come for your Grapes of Wrath”

Reviewed by Lou Pendergrast on 19 April 2013