Book Review: All the Things We Never See by Michael Kelly - More2Read

All the Things We Never See by Michael Kelly 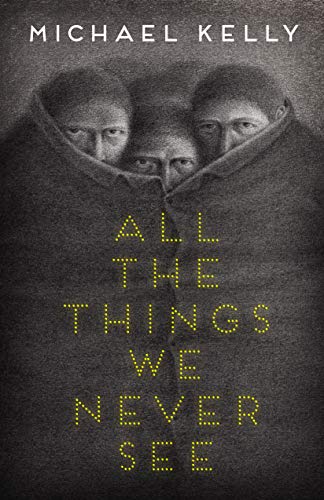 Distilled through the occluded lens of weird fiction, Michael Kelly’s third collection of strange tales is a timely and cogent examination of grief, love, identity, abandonment, homelessness, and illness. All cut through with a curious, quiet menace and uncanny melancholy.

Praise for All the Things We Never See:

“The stories in Michael Kelly’s All the Things We Never See balance on the delicate knife edge of the weird, taking place at the moment of incision, just before the blood rushes to the cut. Full of quiet menace and strangeness, with characters bound into odd relationships both to the world and themselves, relationships they themselves often fail to understand, this is weird fiction at is finest.”
— Brian Evenson, author of Song for the Unraveling of the World

“Michael Kelly’s sharp collection of uncanny stories will leave you questioning your relationships, your identity, and reality itself. These stories dig between your ribs and place a cold finger on your heart.”
— Paul Tremblay, author of The Cabin at the End of the World, and A Head Full of Ghosts

“After having nurtured a sterling reputation as a curator of weird fiction, Michael Kelly here reminds us that he’s one of its best practitioners, too. ALL THE THINGS WE NEVER SEE is eerie and unsettling in the best ways, subverting reality and turning it back on itself, questioning the very earth under your feet. In the end, you’re left not scared so much as uncertain, even vulnerable—your throat exposed to unseen forces.”
— Nathan Ballingrud, author of Wounds, and North American Lake Monsters

“Like a cottonmouth sleeping under a silk sheet, there’s something unsettling under the surface of Michael Kelly’s stories—and once these tales sink their fangs into you, as they did into me, you’ll find the venom is strangely addictive.”
— Craig Davidson, author of The Saturday Night Ghost Club

A possible expansion of your reading radar with snippets of stories, small visions with a cast of characters, matters and things in lucid form, haunting ones, twisted and disturbing worlds, ones with pains, sorrows, and small joys.

My few words on a selection of notable tales.

(This collection recommended by the author Brian Evenson in my interview with him here. https://more2read.com/review/interview-with-brian-evenson/)

The Face That Looks Back at You

Looking into mirror fearfully at what may look back at you, along with the marital troubles, trying to save things going south, a drive up north to a cabin, a little vacation, providing possible break in the dread with interlining terrors.

Wounded bird brought indoors a man lonely friendship and there is bird chatter with twist of haunting.

Parents gone, staying with uncle near the sea, talk of bait, fishing, hunting and mermaids, it’s school holiday, been feeling like a pariah, curiosity over uncles locked cellar forms, secrets waiting to be released. One little short and disturbing tale.

A Crack in the Ceiling of the World

A crack in the world, a gateway, two worlds separated, one has Ezekiel and dragon and the other …
A Intriguing and catastrophic situation.

“This was once the realm of memories. Memories were king. Memories were true. Deep in the bowels of this world, in the lightness mines, memories were all you had. Soon enough, even your memories succumbed to the terrible heat of the blast furnaces, the infernal machines that scorched everything.”

Dreaming and that October feeling and things, that fleeting life before and now.

Upon a journey, Myra In The desert, starkness and serenity, a woman ventures, walking, driving, encountering a mesquite tree, navigating to a future, needing and thinking, remembering an encounter with a mysterious man, feeling pains and sorrows strange encounters in the barren landscape with trees and figures.

Other Summers with Ray Cluley

Visceral forward into adventure and summer fun through night and the awakened, through dark carnival of the fair with summer fates dreams and melancholy.
If you liked Boys life by Robert R McCammon and Something Wicked this Way Comes by Ray Bradbury you will like this short tale.

Tears from an Eyeless Face

Nice poetic little tale of being with sight but feeling strange and human.

The White-Face at Dawn

“A scarlet dawn breaches the thick gloom of the apartment. Slender pink fingers of thin light rouse me from another restless night, plagued fever-dreams of dear Genevieve, and dreams of the curious tatter-king in yellow robes, a grey and gaunt being that clutches a sceptre of black onyx and wears a crown of tarnished jewels upon his thorny head. His is a face of dark cunning and sharp angles. Grave-worm tongue. It was he, I’m sure, who came for Genevieve.”

Poetic loss piece with a beloved gone.
A character upon a task attempting to create something more magnificent than the King in Yellow. In an discussion with another he learns of the tale of the sorrow spiders.
Psychological haunting Tale with spiders and other things that you won’t forget.

Michael Kelly is the former Series Editor for the Year’s Best Weird Fiction. He’s a Shirley Jackson Award-winner, and a World Fantasy Award nominee. His fiction has appeared in a number of journals and anthologies, including Black Static, The Mammoth Book of Best New Horror 21 & 24, Supernatural Tales, Postscripts, Weird Fiction Review, and has been previously collected in Scratching the Surface, and Undertow & Other Laments.

Reviewed by Lou Pendergrast on 26 August 2019