All the Earth, Thrown to the Sky by Joe R. Lansdale - more2read.com

All the Earth, Thrown to the Sky by Joe R. Lansdale 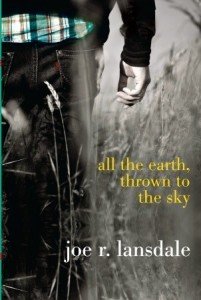 This novel is Lansdale’s second young adult novel, Boar was his first, it is suitable for all ages, from young-adult upwards.
This was another fine example of the great storytelling that he can produce. The is being suitable for young adult contains no profanity or sex.
This story is about youth and loss, the main character a young man and two other individuals a brother and sister cross paths and bond with common harsh realities in their past and present and so they take to the road on a sort of journey to somewhere better, a place with hope, they set out on this path in search for something better rather than the land plagued with storms and dead kin that they have left behind.

When they travel along they encounter some bad people and get caught up in the middle of something they rather not. Some encounter new found emotions of love and they face some big decision making for young folk.
Amongst the tests they go through ultimately you hope that safety, justice and happiness reaches these main characters.

Lonsdale does so well telling stories that deal with the coming of age, justices and injustices. His stories hook you in with uncomplicated but skilled writing with the right words in the right places and memorable characters be they a villain or a heroine. He places you in his characters and puts you in touch with the human playing field their emotions and behaviors and places them in situations that produce greatness, love, hope, fear, courage, cowardliness and happiness.

Some may think this all sounds over the top but read at least four and let me know.
Read these

“But I didn’t want to be like that. I wanted to be like the heroes in books I had read about, who could stand up against anything and keep on coming. I hated to say it about my Daddy, but he had taken the cowards way out, and I hadn’t never been no coward and wasn’t about to start. Still, I broke down and started crying, and I couldn’t stop, though there didn’t seem to be much wet in me. The world was dry, and so was I, and all the time I cried I heaved, like someone sick with nothing left inside to throw up.”

“California was a place some said everyone ought to go. Said there was work there and there wasn’t no sandstorms and there was plenty of water that didn’t taste like grit. After all that happened, I was thinking on it. It wasn’t like I had a lot to pack.”

“As we rode, I looked alongside the roads and saw the sand piled there, and beyond the edge of the roads was more sand. It reminded me of the pictures I had seen in schoolbooks of the Arabian Desert, and it occurred to me that I had near forgot how things had looked before the great winds had come and picked up all the good earth and thrown it to the sky. Thrown it up there and whirled it around, sorted out what good topsoil remained- and that wasn’t much-and then chucked it all over Oklahoma and beyond. It was hard to remember how things had looked when the woods were thick and the fields were high with green corn and rows of shiny green beans and peanuts and potato tops thick and standing up tall, letting you know if you dug down under them, you’d find some fat potatoes for cleaning, cutting, and frying. Peanuts to parch and crack and eat raw. Plenty of peas to pick and boil up with a chunk of pork rind. All gone now.
It was hard to remember the last time I was truly clean. When there wasn’t any dust under my collar, behind or in my ears, or in my hair. It was hard to remember being able to walk to school, or darn near anywhere except a field, and not have to stop to pour dust out of your shoes.
It was hard to remember when all the earth hadn’t been thrown to the sky.”

“I liked hearing her sing. She had a high sweet voice that cut the air like a sharp knife and then came floating down soft as a kitten’s belly.”

My Interview with Joe R. Lansdale

Reviewed by Lou Pendergrast on 20 October 2012