A Far Piece to Canaan: by Sam Halpern 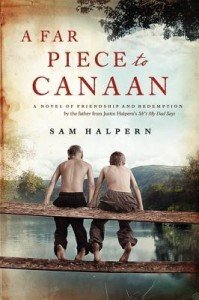 A Far Piece to Canaan is a warm and nostalgic novel from an unexpected source: Sam Halpern, whose salty paternal wisdom made Justin Halpern’s Sh*t My Dad Says a phenomenal bestseller.

Inspired by Sam Halpern’s childhood in rural Kentucky, A Far Piece to Canaan tells the story of Samuel Zelinsky, a celebrated but troubled former professor who reluctantly returns after his wife’s death to the Kentucky hills where he lived as a child to reconnect with long-buried memories and make good on a forgotten promise.

A tale of superstition, secrets, and heroism in the postwar South, A Far Piece to Canaan: A Novel of Friendship and Redemption is the surprising and moving debut of a gifted storyteller.

“ I bit into one of the apples and a gush of saliva and juice filled my mouth. The apple was still green, but so good. Just the way I remembered. Sometimes I felt there were only memories in my life now, the clear and solid drifting substance into a mysterious fog that rolled and shifted and entwined the past, the living and the dead, into a swirling labyrinth in which everything seemed equally distant and ethereal. My parents and siblings were gone, my Nora to cancer, my daughters married to husbands and careers, my students off to the real world, my college in search of a greater trust fund, and me to my dotage as Professor Emeritus of Comparative English Literature, which somehow rang more hollow with each passing day. I looked around at the ragged countryside. What did I want from these over-farmed hills after sixty years? I had no idea, but only days before her death, Nora had made the request that I return. I felt honor-bound to make the journey.”

This excerpt gives us a keyhole into the narrators story, it sums up the journey he will take you on in his first person narrative, from his coming of age to his present, he relives and takes you back in various periods of his life.
A life that once was, on a Kentucky farm, a man, Jew by birth, growing up with a great circle of friends, a friendship bond that would never be forgotten, and all that comes with the fun and mystery of youth, including redemption that needs to be taken account for before his final breath.
The past and present weaved together and essential in understanding this main character, the author has done a great job in writing with a place and people, and the daily running’s of this young man in Kentucky felt real, the emotions and experiences have you feel you are there with him told with the dialect of the region in the past, he adds a true potent and original voice in this mystery and drama, a coming of age tale where a possible devil lurks in The Little Bend Bottoms.
The writing connects with the reader and he displays great ability to show the scene before him in the past and present with a voice that will have you hypnotically transported.
There is death and mystery in this tale, a haunting presence that appeared in his past in the Little Bend bottoms lurks, something that adds that extra storytelling quality and has you engaged and captivated in this tale.
As he revisits his growing place, the farm he once lived on, sixty years later he feels regret on the friends he left behind and lost, he wants forgiveness and to reconcile some deep things that disturbs his heart and soul, he searches the land for familiar faces, but as news of many passed and no longer left he finds who he can connected to his best friend Fred.

He narrates in the first person those bygone days and the mystery that once lay in the Bottoms the nostalgia, humanity against diversity form a story that would stay with you for some time and characters that would remain dearer to you than you could want.
A great read this story was, one not to be missed in the summer of 2013 and I hope is seen and heard of amongst all the great stories out this year, one to be on my best of 2013 list in the Summer.

“Nora, I have read dozens of books on Judaism, and other religions…Buddhism, Islam, Christianity. All have wonderful things in them, all are important as bulwarks of civilisation, but the vast majority require belief in a supreme being. That’s fundamental. I have my own concepts of God and they don’t fit with organised religion. I’m a Jew by birth and very proud of my roots, but it will be a cold day in hell when some rabbi directs my life.”

“After patting the line post, I put my arms on top of the gate and looked across the field. It had been pastureland when we lived on Berman’s, but now it was covered with twenty acres of alfalfa. The little creek still ran through it, creasing the field. In the distance I could see the hickory and locust grove. I had walked this way to the Mulligans’ so many times. In my mind I could still see Fred, sitting on top of the old gate in is Levi’s, multiple shirts, and no-heel shoes. Fred had been the portal to a great adventure-part beauty, part terror, all wonder.
It was getting toward noon. The heat and humidity were making my clothes sticky, and the sound of insects filled the air with a hum. I scanned the vista. Open meadows, dark groves of trees, and green hills covered with patches of wildflowers. Below the hills were valleys with slightly different carpets, but just as remarkable in their glory. I could almost hear the hills speak to my soul. Embrace us, embrace us, our prodigal son. You’ve been long away, but we still love you. Come, mingle, lie among us and become the soil of life.
I inhaled deeply and the air filled my body to my socks. Had I returned to Canaan?”

“It got quiet for a while, then LD said, “What good’s hit gonna do t’ tell if hit’s a crazy man or devil? Aint’t nobody goin’ t’ do nothin’ about it. Everybody’s scared t’ go around th’ Blue Hole. If hit’s a crazy man, he don’t hurt nobody but what goes around th’ Blue Hole. Ain’t ever hurt anybody we for sure know. Killed one or two……. If he is a crazy man, somebody will see him one of these times and shoot him. If hit’s th’ Devil, then you know dang well nothin’ we say’s gonna make a difference.” LD look around at Lonnie and Fred, then said, “Ain’t no reason t’ tell.”
“We don’t tell and hit is a crazy man, he might hurt somebody,” said Fred.
“Don’t nobody know that,” said LD, shaking his head. “Folks been tellin’ about him for years and ain’t nobody but old man Hackett seen him. Nobody believed what old Hackett said. He was out of his head half th’ time. Everybody knows that.”

And finally… three excerpts that hold some great meaning….

“Being human is difficult,” I said aloud. “Common decency is the greatest quality to which one can aspire and the hardest to practise.” I had never expressed that thought before. Maybe I was learning something!”

“Nora. What of Nora, the woman who loved me so much that she put up with my bull****. What the hell did she se in me? She was ten times the person I was, and yet she saw me as “her Rhett Butler.” Her hero? Some hero.
She believed in me! She understood somehow the effect my past had on my life. She said one time that the hill people I described to her had instilled in me a sense of Old Testament honor and its attendant rigidity. Combined with the scholarly bent of my ethnic group, these values had somehow merged to produce a beating who fiercely demanded total intellectual freedom, yet sought absolute truth! I didn’t believe any of that mumbo-jumbo but maybe it was true. If so, it was an unfortunate coupling that had haunted my life.”

“I felt like a man straddling time, part of me in the 1940’s, the other part in the twenty-first century. Something was missing between the halves, something that couldn’t be filled by accolades, money, or even Nora. I needed those things of my distant past- the human beings with home whom I had shared this imperfect place. Canaan land, complete with heroes and Philistine metaphors. Without them, I wasn’t whole.”