Book Review: A Cosmology of Monsters by Shaun Hamill - More2Read

A Cosmology of Monsters by Shaun Hamill 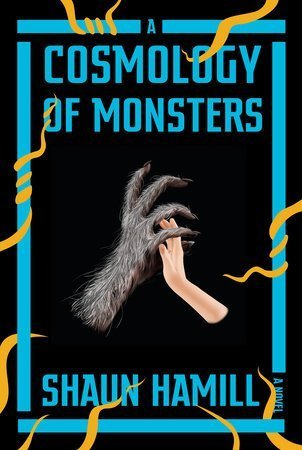 A tender and terrifying literary horror novel–the author’s debut–that tells the story of a family (creators of a haunted house attraction called the Wandering Dark) and the hereditary monsters–both metaphorical and all-too-real–that haunt them.

Monsters both figurative and very literal stalk the Turner family. The youngest child, Noah, narrates the family history: how in the late ’60s, his bookish mother Margaret marries Lovecraft-lover Harry against her better judgment. The couple has two daughters–Sydney, born for the spotlight, and the brilliant but awkward Eunice, a natural writer and storyteller. But finances are tight, Margaret and Eunice are haunted by horrific dreams, and Harry starts acting strangely. He becomes obsessed with the construction of an elaborately crafted haunted house attraction, christened the Wandering Dark. The family tries to shield baby Noah from the house’s faux horrors, but unbeknownst to them, he’s being visited by a furry beast with glowing orange eyes–the same ghastly being glimpsed by both his mother and sister. However, unlike them, Noah decides to let the creature in . . .
As he approaches the conclusion of his family’s tale, it becomes more and more apparent that there’s only one way the story can end: with Noah making the ultimate sacrifice.

Praise For A Cosmology of Monsters:

“Shaun Hamill’s A Cosmology of Monsters brilliantly combines the mythos of H.P. Lovecraft with a contemporary story of a family under threat of destruction from supernatural forces. It succeeds because these are good, likeable people that we root for; they could be our neighbors. Horror only works when we care for the people involved, and because we care for the Turners, their nightmare becomes ours. Hamill’s prose is simple, and simply beautiful. If John Irving ever wrote a horror novel, it would be something like this. I loved it, and think you will, too.”
—Stephen King

“A monster stalks a family across generations; a hidden city beckons from beyond perception; trauma and human frailty and loss bear their terrible fangs. . . . A Cosmology of Monsters is as weird and compelling and ambitious a horror novel as you could possibly want.”
—Carmen Maria Machado, author of Her Body and Other Parties

“Sometimes you read a book and you know it’s special. A Cosmology of Monsters by Shaun Hamill is just such a book. It’s a book about family, love, loss, obsession . . . and monsters. Unique and wonderful. You won’t read anything like it this year.”
—C. J. Tudor, author of The Chalk Man and The Hiding Place

“Exquisitely written, A Cosmology of Monsters is both beautiful and haunting. Shaun Hamill has crafted the best sort of horror story: one full of love and dread that will have you rethinking your definition of what a monster is.”
—Jennifer McMahon

“A Cosmology of Monsters by Shaun Hamill is beautiful, heartbreaking, offbeat horror. A terrific debut.”
—Ellen Datlow, editor of The Best Horror of the Year

“[A] very scary coming-of-age tale that lives in the same space as Stranger Things, Stand By Me, and Stephen King’s It. . . . The way Hamill weaves his way between the phantasmagorical elements and Noah’s everyday dramas is nimble in a way reminiscent of King. . . . An accomplished, macabre horror saga and a promising debut from an imaginative new author.”
—Kirkus Reviews

Meet the Turners, they are alike and unlike any other family, there is Deborah, Harry, Margaret, Eunice, Sydney, and Noah Turner, juxtaposing through their myriad of lows and highs, reader and narrator together through marriage, friendships, death, sickness, poverty, disappearances, and suicide attempts, with wonder, creatives, and joys, through their childhood and adulthood complexities, these battles of inner and outer, monsters inner and outer, encounters, and friendship with another kind.

There will be unraveling events telling the history of kin and the truths revealing their relationship with an insidious melancholy presence.

This world he has created in a debut novel is not an easy task, he has done a great job of creating this world for the reader to escape into, expounding on many complexities and fragilities of the Turner family their tragedies with common and uncommon creatures.

Reviewed by Lou Pendergrast on 17 September 2019