Book Review: A Child Went Forth by Boston Teran | More2Read

A Child Went Forth by Boston Teran 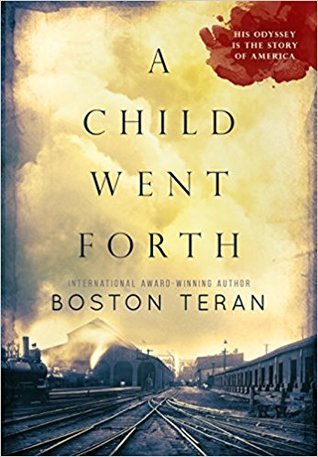 A CHILD WENT FORTH follows thirteen year old Charlie Griffin’s evolvement from boyhood to manhood in the summer of 1855 as he carries money from Brooklyn to Missouri to give it to the abolitionist leaders there. All the while he is being hunted by a ferocious crew of adversaries.

It is an entirely new look at the era, at slavery, racism, political and social corruptions and the cast of people in the novel are an illustrious roll call of characters from the real to the reimagined. From Walt Whitman to P.T. Barnum, to the Brooklyn evangelist and abolitionist Ward Beecher, brother of Harriet Beecher Stowe. The infamous and ghostlike undertaker and anti-slavery insurrectionist Erastus Eels. The millionaire gunfighter and freestater Butler Philips to his dashing and Oxford educated counterpart, the assassin Dixie Jack. And then there is Annie Pie, Charlie Griffin’s confidante, who at thirteen is brave beyond her years, and it is left to her to save him, the boy she has come to love.

Praise for A Child Went Forth:

“Boston Teran writes with masterful skill, his words flowing with power and fury, his dialogue rich and painfully accurate, his tale one that describes a period (the book is set in 1851) fraught with danger, horror and cruelty told with a deft and delicate hand.”
– Lorenzo Carcaterra, New York Times bestselling author of Sleepers and The Wolf

“Boston Teran’s A Child Went Forth is one of those rare novels that’s as much of an experience as it is a story. Poignant, immersive, at times heartbreaking, always entertaining, it deserves to be discussed in the same breath as Mark Twain’s Tom Sawyer, and seems destined to become a new American classic.”
– Russell Blake, New York Times and USA Today bestselling author of dozens of action/adventure and mystery novels, including Fatal Exchange and Zero Sum

Charlie and his father were working a con job, a confidence game, his mother was in a asylum, hard times and hard road ahead of Charlie as he went forth in the big harsh terrible wide world, as a child and becoming a man in time, in the days and year that cometh.

There will be… “$500 REWARD Runaway from subscriber on the 9th of this month after an act of ROBBERY,” Charlie will be on the run. Will he be saved? What has he been caught up in? Will justice prevail?
There may be some love in the world for Charlie on the harrowing and haunting roads his traverses.

The hook of this narrative is one that of the fate of this child to be man, one delivered with some nice writing with sentences expounding and evoking the complexities of his life and path.

“Charlie made his way among the travelers to the prow of the ferry to be free and clear of his father and escape into the salt air and sunshine, when he sees this character, for that is how he would best describe him, wearing a wide brimmed hat at a cocky angle and an easy fitting broadcloth shirt, reading aloud from this wisp of a book he had resting in one hand. His voice was giving the wind as good as it got. “There was a child went forth every day. And the first object he look’d upon and received with wonder, pity, love or dread, that object he became. And that object became part of him for the day, or a certain part of the day, or for many years, or stretching cycles of years.”

“He rode for miles in the rain. A slanting, driving, sheeting downpour. The sky was unsettled and wild and the earth seemed to exist with a force beyond recompense. To the west, the Ozarks were black as the smoke from a terrible fire. “

“And he was alone. There in the wilderness. A speck in the passage of history and time. In a world beyond his recognition. And he was scared. The landscape was an awing vision of natural violence. The world had grown more daunting suddenly, the journey more dreaded, his task seemed like nothing more than the reckless judgment of a child. And he had no one who he could lean his hidden imperfection on. He was diminished in spirit, his resolve foundering, and he began to cry. All his courage and promise were tears running down his cheeks to mix with the rain that dripped to the earth to turn into the mud under Stranger’s hooves.”

“He was shivering right down into the guts of the earth. He felt as if the emotions coming from his heart had been written on weary paper, and the words had a precious sad story to tell. But there was a reason, and within that, smaller more personal reasons, and each reason was a person as important as the next. And all those reasons spoke and became you.”

Reviewed by Lou Pendergrast on 15 December 2018