Forthcoming June 2, 2020 For Preorder: 26 Miles at a Time: A Memoir by the Greatest Marathoner of All Time by Eliud Kipchoge - More2Read

Forthcoming June 2, 2020 For Preorder: 26 Miles at a Time: A Memoir by the Greatest Marathoner of All Time by Eliud Kipchoge 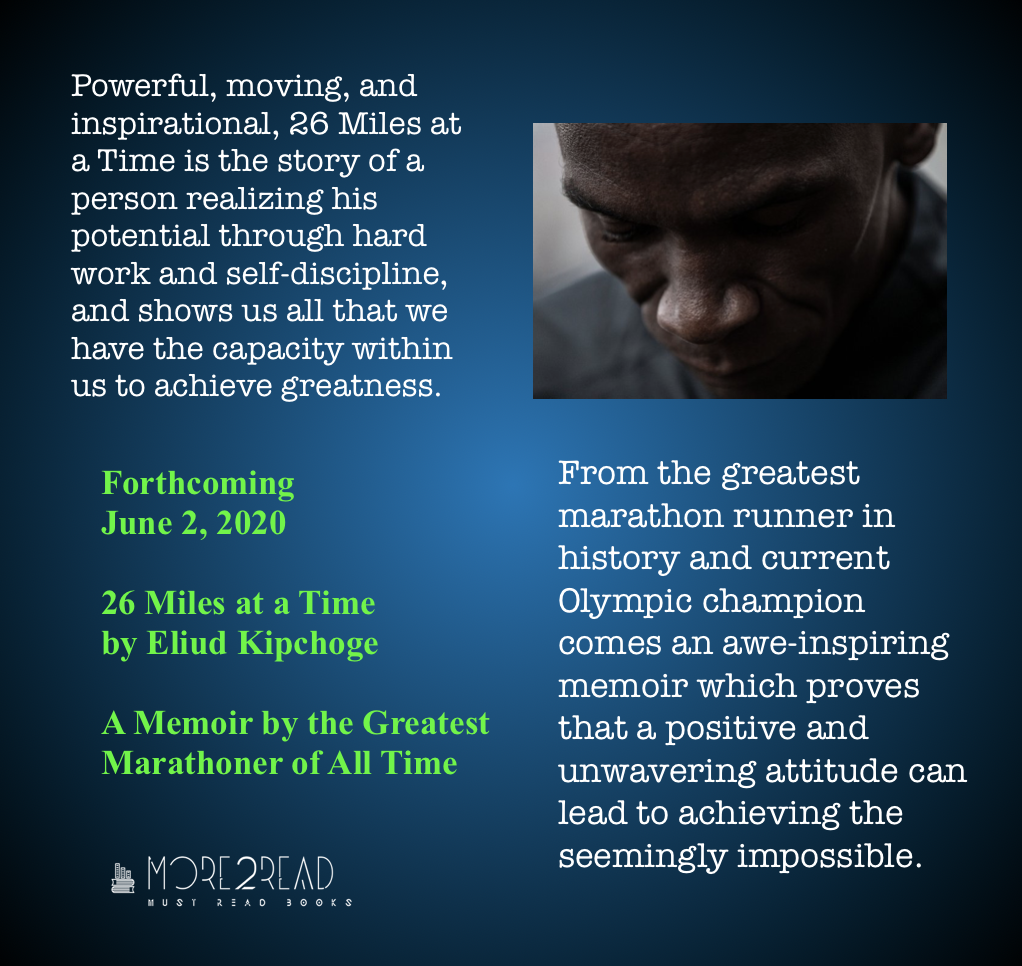 From the greatest marathon runner in history and current Olympic champion comes an awe-inspiring memoir which proves that a positive and unwavering attitude can lead to achieving the seemingly impossible.

Now, for the first time, Eliud Kipchoge—Olympic gold medalist and marathon world-record holder—tells his powerful and inspiring life story. From growing up in a single-parent household on a farm in rural Kenya, to hauling gallons of milk on his bicycle to sell at the local market, to competing in shorter races before finding his true calling in the marathon, Eliud’s story is one of remarkable perseverance and drive.

Discover the qualities that helped guide this soft-spoken champion to victory in twelve out of the thirteen marathons he has entered—all of them major races. Known by his peers as “the philosopher,” Eliud’s success is the result of his drive, discipline, and steady focus on setting small, incremental goals. Featuring excerpts from his extensive training notebooks, Eliud also draws back the curtain on his intense mental and physical training program, which is made up not only of early morning runs and grueling workouts but also of daily chores, finding ways to give back to others, and sourcing strength from his family, friends, and teammates.

Powerful, moving, and inspirational, 26 Miles at a Time is the story of a person realizing his potential through hard work and self-discipline, and shows us all that we have the capacity within us to achieve greatness.

Eliud Kipchoge was raised in Kapsisiywa, Kenya, where he met his coach, Olympic medalist Patrick Sang, at the age of sixteen. Eliud has won twelve out of the thirteen marathons he’s entered, and went on to shatter the world record at the 2018 Berlin Marathon. He also won the Olympic gold medal in the 2016 Rio Games. He currently lives with his wife and three children in Eldoret, Kenya.

Reviewed by Lou Pendergrast on 18 October 2019