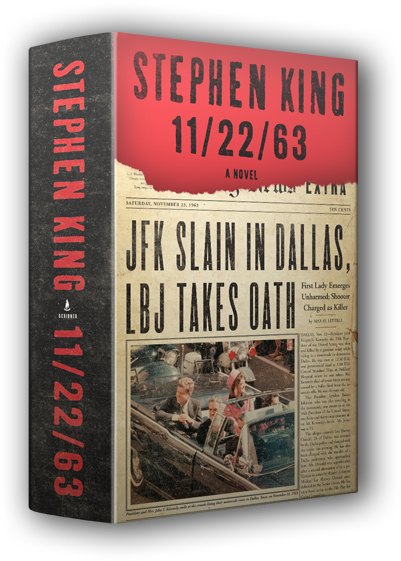 ON NOVEMBER 22, 1963, THREE SHOTS RANG OUT IN DALLAS, PRESIDENT KENNEDY DIED, AND THE WORLD CHANGED. WHAT IF YOU COULD CHANGE IT BACK?

In this brilliantly conceived tour de force, Stephen King—who has absorbed the social, political, and popular culture of his generation more imaginatively and thoroughly than any other writer—takes readers on an incredible journey into the past and the possibility of altering it.

It begins with Jake Epping, a thirty-five-year-old English teacher in Lisbon Falls, Maine, who makes extra money teaching GED classes. He asks his students to write about an event that changed their lives, and one essay blows him away—a gruesome, harrowing story about the night more than fifty years ago when Harry Dunning’s father came home and killed his mother, his sister, and his brother with a sledgehammer. Reading the essay is a watershed moment for Jake, his life—like Harry’s, like America’s in 1963—turning on a dime. Not much later his friend Al, who owns the local diner, divulges a secret: his storeroom is a portal to the past, a particular day in 1958. And Al enlists Jake to take over the mission that has become his obsession—to prevent the Kennedy assassination.

So begins Jake’s new life as George Amberson, in a different world of Ike and JFK and Elvis, of big American cars and sock hops and cigarette smoke everywhere. From the dank little city of Derry, Maine (where there’s Dunning business to conduct), to the warmhearted small town of Jodie, Texas, where Jake falls dangerously in love, every turn is leading eventually, of course, to a troubled loner named Lee Harvey Oswald and to Dallas, where the past becomes heart-stoppingly suspenseful, and where history might not be history anymore. Time-travel has never been so believable. Or so terrifying.

The grandmaster of storytelling, the Dickens of modern times is back with another top read. He’s back with no Here’s Johnny! but certainly here’s Lee Oswald! a brutal husband and a father.
The stage is set the focal time 22nd November 1963, enter the main protagonist Jake Epping soon to be known as George Amberson down the Alice in Wonderland Rabbit Hole, the mission to rewrite history. What Jake undertakes has deeper impact on himself than he could wish.
I got the feel from this novel that the 1960’s was a lovely era a feel of innocence in the air, boys with flattop crew cuts, girls with ponytails and shin length poodle skirts. Jitterbugging and lindyhopping. There is fully flavored Root beer and Catcher in The Rye was banned from school libraries.

Jack travels to 1958 and starts his new life with taking up the position of an English teacher in a school that he finds he really loves teaching at and meets people that are to change his future. For a man who has in the past hardly shed a tear he is to learn many new emotions and he can’t quite understand how to deal with those responsible for them, in the course of preventing the Kennedy assassination he finds himself with a few obstacles. He also tries to undo another history of a friend from his present one of the murderous kind. Feel immersed and enjoy a heart warming story of humanness.

The beauty and skill of Stephen Kings writing is he brings to the table ordinary individuals and pitches them against adversity, some are triumphant others not. The age old battle of good versus evil he does so well, the master conjurer of nightmares, the writer of redemption and darkness of the heart. He writes the character driven story well and don’t think he’s lost his swagger as he has plenty of steam in his tank and proves it year by year. This is not a king novel in the way as The Shining was a horror novel but is a King novel in that he writes so well with the darkness of heart as a key player. He keeps turning out good stories. Its a hard market the short story category but King always seems to revive the art of Short story telling. Full Dark No Stars by King done so well in 2010 and this year I am sure 11.22.63 as a novel is to lead as the best of 2011.

“If you ever wanted to change the world, this is your chance. Save Kennedy, save his brother. Save Martin Luther King. Stop the race riots. Stop Vietnam, maybe’ he leaned forward. ‘Get rid of one wretched waif, buddy and you could save millions of lives.”

“Money comes back. It stays no matter how many times you use the rabbit-hole.”

“life turns on a dime, and when it does, it turns fast.”

“The Cullums were at one end of the seesaw; the Oswalds were at the other. And Jake Epping, also known as George Amberson? He was the tipping point.”

“there’s an old saying: peek not through a knothole, lest ye be vexed. Was there ever a bigger knothole in human history than the Internet?”

Reviewed by Lou Pendergrast on 08 November 2011