Book Review: The Reapers Are the Angels by Alden Bell - More2Read

The Reapers Are the Angels by Alden Bell 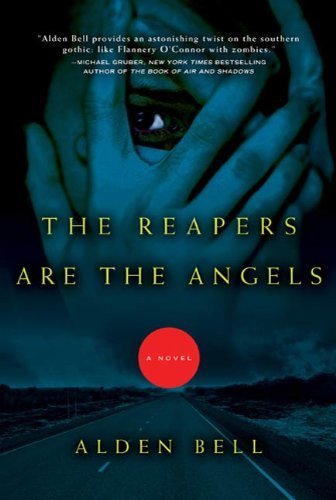 Zombies have infested a fallen America. A young girl named Temple is on the run. Haunted by her past and pursued by a killer, Temple is surrounded by death and danger, hoping to be set free.

For twenty-five years, civilization has survived in meager enclaves, guarded against a plague of the dead. Temple wanders this blighted landscape, keeping to herself and keeping her demons inside her heart. She can’t remember a time before the zombies, but she does remember an old man who took her in and the younger brother she cared for until the tragedy that set her on a personal journey toward redemption. Moving back and forth between the insulated remnants of society and the brutal frontier beyond, Temple must decide where ultimately to make a home and find the salvation she seeks.
Praise

A girl who’s traveled the land, her mind filled with people, sights and words, with sins and redemption. She’s only 15 and has killed many the rule is kill or be killed. A desolate land of death and zombies, she did not choose this destiny. Amongst the contagious spreading of zombies, she hides from many in the shadows and is well equipped to fight twice her size equipped with her gurkha knife. This story is written well, a story so bleak about death and survival and love has some beautifully written lines, written in eloquent prose that makes the zombie story that so much better.

The story is about death and redemption and one girl’s eventual outcome amongst darkness, at times heart-breaking.

The island, The Lighthouse, The Moon and The Miracle of the Fish.

“And, too, a carnival of death, a grassy park near the city center, a merry-go-round that turns unceasing hour by hour, its old-time calliope breathing out dented and rusty notes while the slugs pull their own arms out of the sockets trying to climb aboard the moving platform, some disembodied limbs dragging in the dirt around and around, hands still gripping the metal poles—and the ones who succeed and climb aboard, mounting to the top of the wooden horses, joining with the endless motion of the machine, dazed to imbecility by gut memories of speed and human ingenuity. And the horde, in the blackout of the city night, illumined only by the headlights of the car, everywhere descending and roiling against one another like maggots in the belly of a dead cat, the grimmest and most degenerate manifestation this blighted humanity on this blighted earth—beasts of our lost pasts, spilling out of whatever hell we have made for them like the army of the damned, choked and gagging and rotted and crusty and eminently pathetic, yes, brutally, conspicuously, outrageously pathetic.”

“If you loved Justin Cronin’s The Passage, this summer’s vampire hit, you’ll get a charge out of The Reapers Are the Angels. It’s a literary/horror mashup that is unsettlingly good.”—USA Today

“The Reapers Are the Angels is a knockout, a fresh take on the zombie novel, with a heroine you can’t help but root for as she braves the land of the living dead and the dead living, pursued by a foe far more dangerous than flesh-eaters and with the beacon of redemption flickering ahead. Alden Bell will snatch your attention and keep it until long after you close this book.”—Tom Franklin, author of Hell at the Breach

“Alden Bell provides an astonishing twist on the southern gothic: like Flannery O’Connor with zombies.”—Michael Gruber, New York Times bestselling author of The Book of Air and Shadows

“Alden Bell has managed something improbable and striking: a disconcertingly beautiful tale of zombie apocalypse. The Reapers Are the Angels is soaked in all the blood that any horror fan could desire, the effluvia rendered in a high Southern Gothic style as redolent of rotting magnolia as anything written by William Faulkner or Cormac McCarthy.”—Charlie Huston, author of Sleepless
“… This is a must-read for those who like their literature both brain-specked and philosophical.” –journalstar.com