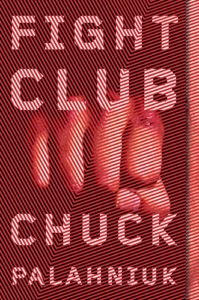 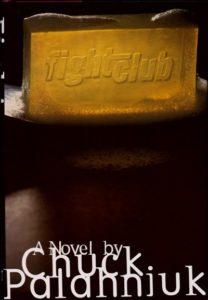 1st rule about Fight Club is read the novel first! Well that is my rule, i watched the movie, when it came out years ago (most the population) and only now discovered the real Fight club.

The narrator is a traveling automobile company employee who suffers from insomnia. On advice from his doctor attends support groups and pretends to be a victim. He gains some emotional release here and feels part of a people and becomes addicted to attending these support groups as an imposter. He’s not the only one who’s a trickster and important character pops up at the meetings Marla and they both find they have an emptiness to fill and befriend each other.

On a flight he befriended a key character of the story, Durden a soap salesman, they arrange to meet at a bar and the rest is history as they say. They set up a fight club the rules are…

1.You don’t talk about fight club.

2.You don’t talk about fight club.

3.When someone says stop, or goes limp, the fight is over.

4.Only two guys to a fight.

6.They fight without shirts or shoes.

7.The fights go on as long as they have to.

8.If this is your first night at fight club, you have to fight.

They are “a generation of men raised by women,” being without a male example in their lives to help shape their masculinity. The fight club is not really about physical combat, money, skill or winning but instead a way for participants to experience feeling in a society where they are otherwise numb. The fighting forms a resistance to the impulse to be “cocooned” in society. The fighting between the men stripped away the “fear of pain” and “the reliance on material signifiers of their self-worth”, leaving them to experience something valuable.

As the fight club’s membership grows Tyler begins to use it to spread his anti-consumerist ideas and recruits fight club’s members to participate in increasingly elaborate pranks on corporate America. This was originally the narrator’s idea, but Tyler takes control from him. Tyler eventually gathers the most devoted fight club members (referred to as “space monkeys”) and forms “Project Mayhem,” a cult-like organization that trains itself as an army to bring down modern civilization. This Organization, like fight club, is controlled by a set of rules:

5.You have to trust Tyler.

I can not comment anymore on the story as i don’t want to spoil the story any further.

This was a thought provoking read and written in a wacky style.

Think of the Psycho movie and that Jack Nicholson character from One Flew over the cuckoos nest playing Mr Bates and you might have something close to the protagonist in this story.

“But I’m Tyler Durden. I invented fight club. Fight club is mine. I wrote those rules. None of you would be here if it wasn’t for me. And I say it stops here!”

“I love everything about Tyler Durden, his courage and his smarts. His nerve. Tyler is funny and charming and forceful and independent, and men look up to him and expect him to change their world. Tyler is capable and free, and I am not. I’m not Tyler Durden.”

“This was the goal of Project Mayhem, Tyler said, the complete and right-away destruction of civilization. What comes next in Project Mayhem, nobody except Tyler knows. The second rule is you don’t ask questions.”

“It’s Project Mayhem that’s going to save the world. A cultural ice age. A prematurely induced dark age. Project Mayhem will force humanity to go dormant or into remission long enough for the Earth to recover.” 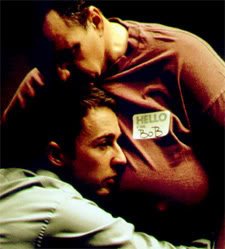 Reviewed by Lou Pendergrast on 14 August 2011